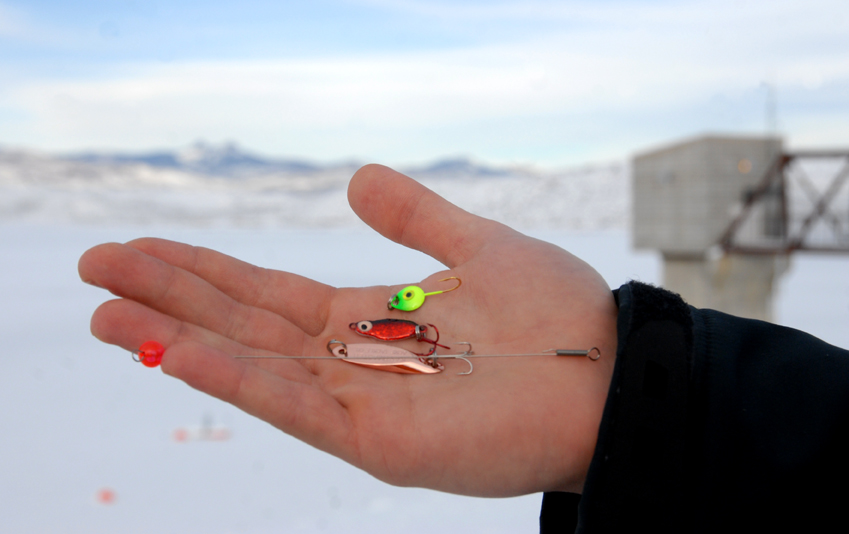 “You can go out to a place like Stagecoach (State Park) and there will be 50 people all having success with 50 different things. Ice fishing is just like anything else, if you’re comfortable with what you’re using you’re going to catch fish.”

— Rich King, owner of Auto Parts of Craig, about ice fishing in the Yampa Valley.

There’s world class downhill skiing a mere 40 miles to the east, snowmobiling right here in Craig, and endless opportunities to break out the snowshoes for a cold weather hike.

But for Yampa Valley’s hard core anglers nothing says winter like taking a trip out to a frozen lake, drilling a few holes and plopping down on a plastic bucket for a few hours of ice fishing.

Rich King, owner of Auto Parts of Craig, is one of those local die hards and enjoys ice fishing so much that four years ago he began selling lures, rods, bait and augers for the sport out of his shop at 1875 W. Victory Way.

“The great thing about adding fishing equipment was it gets so boring in the winter, so it brought people in,” King said. “The bad thing is now I never get to go fishing.”

King has been an ice fisherman for most of his life, and although he sells a variety of baits and lures capable of catching fish, there’s a handful he never leaves home without.

“You can go out to a place like Stagecoach (State Park) and there will be 50 people all having success with 50 different things,” King said. “Ice fishing is just like anything else, if you’re comfortable with what you’re using you’re going to catch fish.”

King never sets out for a trip on the lake without his one/eighth ounce copper KastMaster, but he also keeps a variety of jigs on hand.

Green Gem-N-Eye jigs tend to work best this time of year, King said, but he’ll also use darker colors, like a red Frostee Spoon, if he treks out to a high mountain lake. And because fish tend to bite more softly during the winter, King also outfits his rig with a strike indicator so not to miss out on an opportunity to reel in a toad.

Baits like Salmon eggs also work well on the ice, King said, but people also have a lot of success threading wax or mealworms onto the hook of a lure.

“The people that like waxworms really, really like waxworms, and the people that like mealworms swear by mealworms,” King said. “I’ve found waxworms work better early in the season because they’ll freeze when we ship them here in the dead of winter. Mealworms are a lot hardier, and I’ve had a lot of success with them mid season when the temperatures are at their coldest.”

“We had a few people out on Elkhead and I’ve heard it is extremely slow, almost non-existent,” Dellacroce said. “The ice came on late, but we checked in on some people over the holiday and they weren’t doing very well at all.”

The action at Elkhead has historically been slow for a number of reasons, Dellacroce said.

First off it was constructed as a warm water fishery, and although there are some trout, the fish population at Elkhead primarily consists of crappie, bass and pike, which don’t feed as actively during the winter, Dellacroce said.

Though residents in northwest Colorado are famous for their snow dances, nothing has wreaked more havoc than the rash of storms in December, Dellacroce said.

“Anytime we talk about ice fishing we emphasize ice safety, especially out on Elkhead,” Dellacroce said. “The trouble with most of our lakes is we start getting snow before the ice really gets solid, so you get multiple slush and ice layers.

“Elkhead also has a lot of springs, so you could be in one place where it is really solid, then move 200 feet away and it’s really unstable because so much water is moving underneath. It can be really, really sketchy.”

And Kimi Lehman, administrative assistant at Stagecoach, said the ice fishing has really picked up in the last week or so.

Unlike Elkhead, Stagecoach was constructed to be a coldwater fishery, and although there are some pike, trout dominate the population.

So far there have not been any reports of pike caught this winter at Stagecoach, Lehman said, but anglers are landing a lot of trout between 15 and 18 inches, with a handful of 21 plus trout coming out of the ice near Morrison Cove.

As King predicted, Lehman said anglers have had the most luck fishing green jigs at a depth of about 15 feet.

Although conditions are a bit better in Routt County, Stagecoach is still in the early part of its season, which typically runs from late December to March, Lehman said.

“Be prepared, dress warm, and wear good boots because there is slush on top of the ice,” Lehman said. “Bring a buddy because you never know what ice conditions are like and use caution because early season ice can be sketchy.”

A state parks pass is required to park a vehicle at Elkhead Reservoir and Stagecoach State Park. Daily passes can be purchased onsite for $7. An annual pass, which can be purchased at any parks and wildlife office, costs $70.