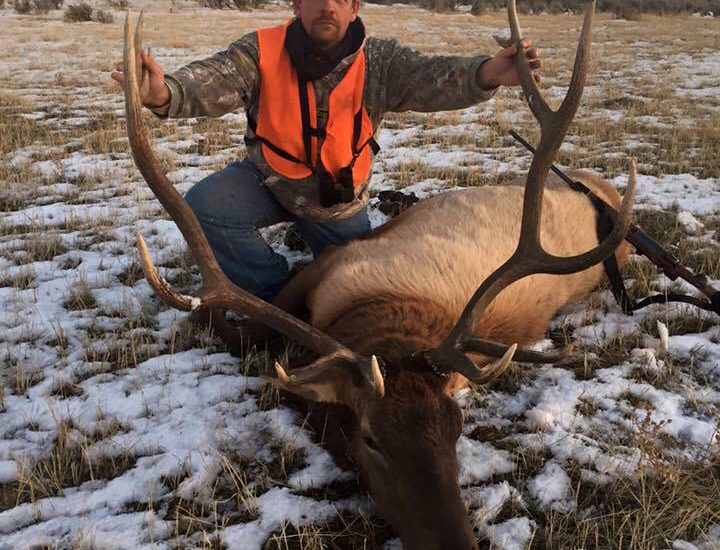 During his lifetime, Northwest Colorado hunter Tim Meyer has had to change his approach to hunting herds of mule deer, elk and pronghorn antelope. These days, he might have to work a little harder, but it’s still as much fun to him as his first hunt, at age 12.

Hunting in Game Management Unit 4, he brought a bull elk home during the third rifle season in 2015 and the muzzleloader season in 2017.

Following is Meyer’s recollection of those successful hunts.

In 2015, it was the very last day and about 20 minutes before dark when I brought this six by six bull elk down. It was my wife’s first year hunting buck deer in Colorado, and I decided to get a bull tag. But, we mostly hunted for her buck. She filled her tag at our house the day before with a five by five buck.

The next day was the last day of the season. We weren’t going to go out that night, but about two hours before dark, we decided to go for a drive. We got up to one of the areas we spot from. We glassed it and saw a couple of smaller bulls. After looking closer, we noticed about six in the group, all spread out and feeding. It was about a quarter of a mile, all uphill, to where I got him. I waited for a clear 100-yard shot, shot him and it was done. We packed it out that night. We process everything on our own.

Last year, I hunted with a muzzleloader. It was about halfway through the season, and I was out hunting when I saw a couple spikes walk by. Then, I noticed two bulls — four by fours. I took the first clear shot.

The terrain wasn’t bad. It was more flat and wooded. I hunted every day, but my hunts were getting ruined by other people. So I went to a new place where I had never hunted before and was successful on the first day there.

Last year was my first year muzzleloading. You have to be a lot closer. I got my bull at 20 yards. It’s a lot like archery, but you are using a gun.

This year, the plan is to hunt archery season. I’ve harvested about 15 bulls since I started hunting at the age of 12. I hunt deer and elk every year to provide meat for the family. It’s been part of my life, my whole life, and a family tradition. I really enjoy it. I’ve hunted pigs in Texas, bear in Colorado. I got a really nice one in 2005. It’s a passion. It’s peaceful and quiet.

I know everyone complains that there are no animals; there are lots of animals. But people are so reliant on side-by-sides and four-wheelers. You have to be willing to put forth the effort to go find them. If you want it bad enough, you will find it.