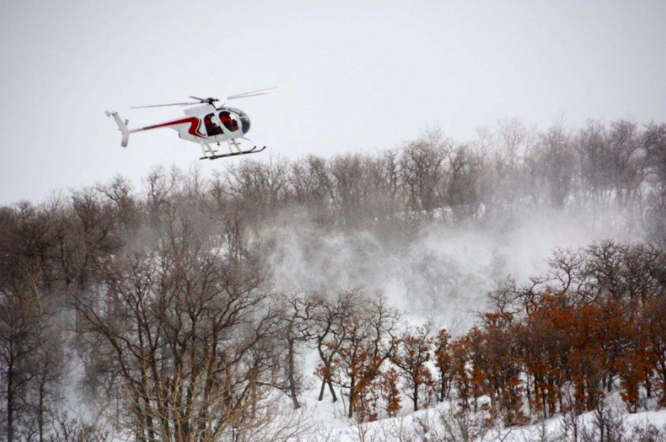 STEAMBOAT SPRINGS — As part of a study between Colorado Parks and Wildlife and the University of Wyoming, wildlife officials have completed their second round of collaring elk in Routt County.

Wildlife officials spent Tuesday and Wednesday flying helicopters from Catamount Lake to Mad Creek and shooting 500-pound nets from the low-to-the-ground aircraft to groups of resident elk, as opposed to elk that migrate throughout the region.

Once netted, researchers place collars on the elk, which have GPS trackers on them to trace their movements, and then let the elk go. The collars are programmed to drop off in two years.

Researchers began the project in January 2020 and will continue collecting data until 2022. The research aims to study the movements of elk in the area and how outdoor recreation, which has skyrocketed since COVID-19 began, impacts their movement patterns.

“We’re trying to collect information to inform decision making, so that we can balance wildlife safety with human recreation,” said Nathaniel Rayl, the wildlife researcher at Parks and Wildlife leading the project.

Rayl said Colorado has to balance its roles of holding the largest elk population in the world with its booming outdoor recreation industry, as the two are often at odds with one another.

“I want to make sure we can have opportunities for both recreation and wildlife on the landscape,” he said.

Larry Desjardin, president of Keep Routt Wild, said while outdoor recreation has saved many in the COVID-19 pandemic and provides physical and mental health benefits, recreators must be more conscious of their impact on wildlife, particularly elk, which were hunted almost to extinction and took refuge in the Flat Tops Wilderness Area.

“Recreation is causing an impact because wild elk are very sensitive to human disturbance and will avoid humans,” Desjardin said. “The more we’re going to the outdoors, the more our presence pushes them to a smaller habitat.”

Desjardin said the Vail area has seen a strong decline in the size of elk herds there, which many biologists point to as a direct result of outdoor recreation. A wildlife official in Vail told High Country News the area could be facing a “biological desert” if trail building continues in elk habitats.

While the practice of netting and collaring elk could be seen as cruel to an outside eye, Desjardin said moments of shock and pain are traded for decades of protection for elk herds.

“The animal is scared during this time, there’s no way around that, but this is, I think, the least disturbing for them,” he said. “You disturb 30 of them in order to make public policy decisions to protect that entire herd, it’s a reasonable trade off.”

Collaring will hopefully help drive policy for decades to come, Desjardin added, much of which should center around where recreating trails are being built and ensuring they’re not built near elk habitats.

“If we’re going to add more recreational activities or trails, do it outside of their key habitat or put them in already disturbed areas,” Desjardin said. “If Routt County can adopt some of these approaches, we may be the trailblazer for the rest of Colorado and the country.”