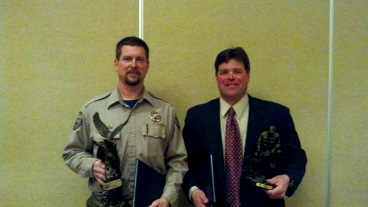 Craig — Colorado Parks and Wildlife honored employees during an awards banquet in February in Colorado Springs.

Among the winners were two Parks and Wildlife officials based in Steamboat Springs: aquatic biologist Bill Atkinson and property technician Steve Baumgardner.

Baumgardner was recognized as the Outstanding Property Technician of the Year for creating 65 acres of wetlands habitat, beetle-kill tree removal, improving the Hayden shooting range and his “all-around willingness to do whatever it takes to improve the wildlife habitat in Area 10,” according to a Parks and Wildlife news release.

Atkinson was honored as the Outstanding Biologist of the Year for his efforts to improve fisheries in Steamboat Springs, notably the upper Yampa River.

“Bill is incredibly passionate about the wildlife resource. Looking over his list of accomplishments in 2012, one would think we were honoring someone for a career’s worth of work.”

The Hart award, named after a legendary Colorado game warden, recognizes the top wildlife officer each year for his or her actions not only in wildlife law enforcement but for work in education, wildlife management, community engagement, habitat protection and team work, according to the release.

Barr Lake State Park manager Michelle Seubert was named Outstanding Ranger of the Year and was lauded in her nomination form for her innovation, perseverance, volunteerism and positive approach to the job.

“To be honored with this award by my peers and have my family by my side made this a day to remember,” Seubert said. “I’ve had so much support from a lot of talented people through the years, and I am proud to be part of CPW family.”

Jim Jones Outstanding Employee of the Year: Greg Policky, aquatic biologist, for his years of work improving the once-troubled trout fishery in the upper Arkansas River between Leadville and Penrose.

Outstanding Manager of the Year: Larry Rogstad, Area Two wildlife manager in Loveland, for his work managing an array of wildlife species in a mix of urban, suburban, rural and remote environments.

Support Services Employee of the Year: Cindy Riggins, southeast region office manager in Colorado Springs, for her work to keep pace with a multitude of changes during the merger of the Colorado Division of Wildlife and Colorado State Parks.

Outstanding Effort of the Year: Brett Ackerman, regulations coordinator, for his work to devise a technology solution that reduces agency office supply costs, cuts staff time, eliminates costly regulatory material mailings and makes communication easier through the use of iPads.

Creative Idea of the Year: Matt Kanode, GIS specialist, for developing a mapping solution that allows hunters to download geospatially enabled maps of Walk-In Access properties to their smartphones and navigate the properties using GPS.