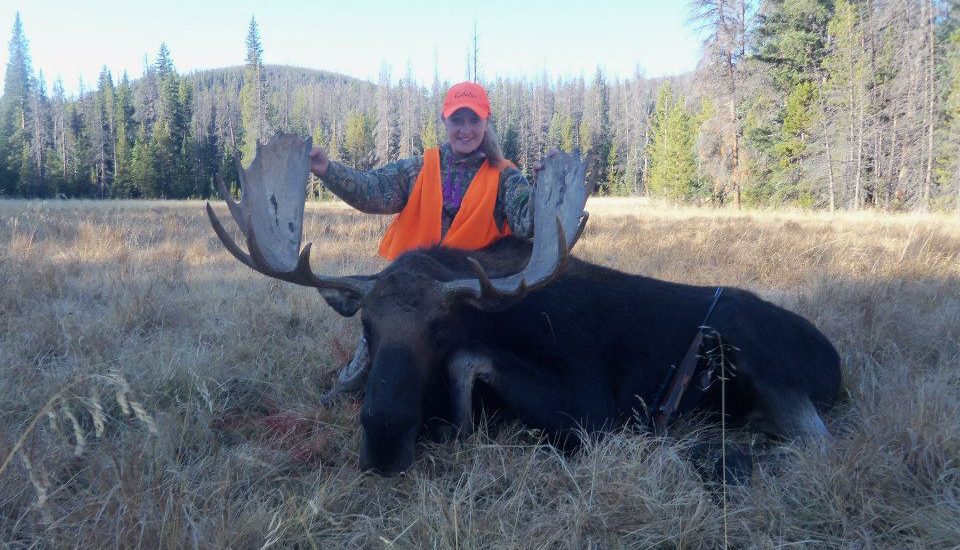 A Moffat County High School student got a once-in-a-lifetime hunting opportunity and made the most of it.

Molly Nations, 17, drew a bull moose tag in just her fifth year putting in for tag. The 1-in-14,000 chance fell in Nations’ favor, though, and she got the most difficult tag to get a hold of in Colorado.

“For most people it takes about 20 to 25 years,” Nations said of getting a bull tag. “So I got really lucky. Everyone that I talked to said they’ve put in more years than I’ve been alive.”

Her family members couldn’t believe the news when they found out.

“I was just amazed and excited for her,” said Debbie Nations, Molly’s mother. “I was wishing I had drawn one too. It was really cool.”

Nations went with her family and several family friends to Grand Lake to scout out good moose-hunting locations in GMU 18 the weekend before the rifle season began Oct. 1. The scouting did not yield many results, though, and when the season started, moose were even scarcer.

“We scouted and saw very few bulls Saturday and Sunday,” she said. “Then Monday, when season started, we didn’t see any of course. Tuesday, we saw a little bull at a trailhead and later that night we saw a cow, and that was it.”

The lack of moose made Nations a bit nervous at first, because she was operating on a slight time crunch due to school.

“It was the week of homecoming and I had to be back that Friday to race a boat I had built for a big grade,” she said. “So I really wanted to shoot a moose, but I really had to get back (by the end of the week) too. It crossed my mind, “Am I going to get one?” The first day was a little bit discouraging, but once we saw a the two moose the next day it brought my hopes up a bit.”

Despite rare moose sightings for four days, Molly and father, Brent, set out Wednesday morning and came across three bulls in a clearing. Putting four days of no success behind her, Nations took her shot.

“We saw three bulls in a clearing and I shot the biggest one,” she said. “Within five minutes of seeing them, I had one.”

Molly says she teared up when she knew she definitely had a moose, the excitement beyond anything else she had experienced while hunting. But there was still plenty of work to do.

The Nations initially had set out with a group of seven or eight people, including family friends Bill Baker and Mark Doehling, who had been moose hunting the year before and returned to help and relive the experience. But after Tuesday, the majority of the clan left, leaving just Molly and Brent to deal with the moose after it had been killed.

“We had three or four other people there the whole weekend helping us look,” Brent said. “They were there just to help us and have fun, but the day they left is the day she got one.”

The result was a comical scene of dragging the half-ton moose up a hill behind a four-wheeler. The moose was so heavy, Molly said, it was tipping the four-wheeler backward while going up the hill, so the front of the four-wheeler had to be winched to a series of trees to stay on the ground.

“We had to figure out the best way to do it ourselves,” Molly said. “It was pretty crazy.”

However, Molly said, every painstaking inch was worth it.

“I got to go to Canada for a bear hunt and my moose hunt was 10 times better than that,” she said. “It was a lot more exciting. Most things I’ve shot happen on the opening morning (of the season). So having to wait and not seeing anything and be patient was well worth it.”