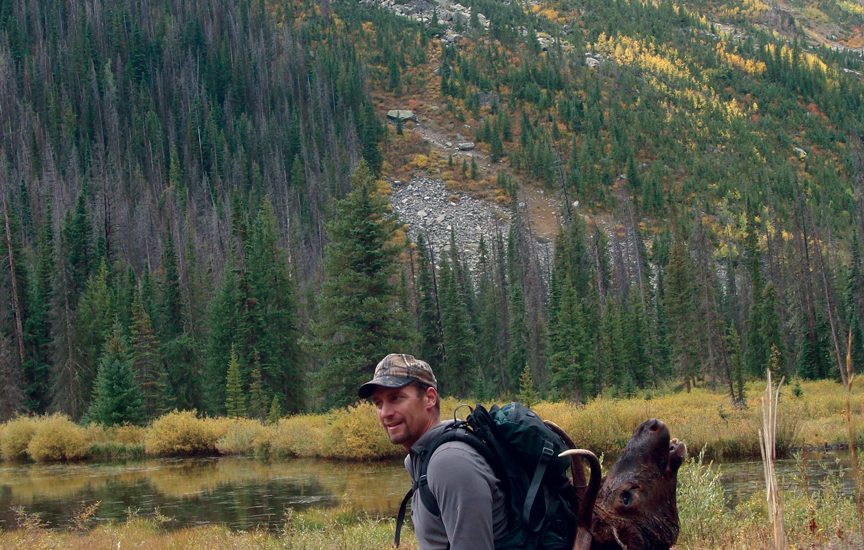 A member of the U.S. Ski team from 1987 to 2006, including making the Olympic downhill team in 1994, Steamboat-raised Craig Thrasher likes sighting big game as much as he does skiing. “I started hunting the first year I was old enough to hunt grouse, with a single shot .22,” he says. “And we normally got our birds.”

He started bow hunting in the late ‘80s with fellow ski team member Lonny Vanatta, and claims he was the 70th person in Colorado to kill eight big game species with a bow. Thrasher still hunts every season, staying in shape for the long trudges through Routt County by racing triathlons. “It’s all to stay in shape so I can hang around with my brother, TJ, when he decides to take me hunting,” he says.

This year, he’ll return from his home in Wisconsin to hunt with his father, John, who pulled a tag for one of Northwest Colorado’s premier units. “I’m looking forward to helping him,” he says. “He taught me how to hunt. My time spent chasing elk with him are some of my fondest memories.”

After getting picked up at the Denver airport by Mom and Dad, we drove up to Steamboat where I quickly organized gear, bought a license, and loaded a pack for three nights in the wilderness with my brother, TJ. He had already filled his tag so he was my videographer, guide, potter, packer and companion. It was Thursday, Sept. 17, at dark thirty when we started trekking up the mountain. Around 11 p.m. we found ourselves close to bugling elk and set up camp.

The bulls bugled most of the night and we got up early when it was still dark and snuck into the herd. The elk were close and still bugling. This herd turned out to be mostly small bulls, without a shooter. So we headed around the mountain and found a lake full of cutthroat trout. We caught more than a dozen, a few of which made a dandy lunch. After a quick rest we headed out again and found another herd. But we buggered them as soon as we found them. Oops!

That night, at about 1 a.m. as the frost built up on my tent, I heard a bull bugling and getting closer. Soon the bull and his cows were right on top of us; I thought they were going to step on TJ’s bivy sack as they bolted through camp. We chased them all morning and couldn’t figure out what spooked them until later when we spotted a group of hikers.

After three hunts we had seen a lot of elk but hadn’t gotten too close to any. Strange events and overzealousness had cost us a few opportunities. Still it was a gorgeous September day and we were having a big time. When an afternoon thunderstorm rolled in we got down in some cover, pumped some water out of a seep into our bottles and loaded the packs in search of lower ground.

Dropping out of the meadows with thunder banging around us, we heard midday bugles ringing up from the timber. The bulls were going crazy. We got within a couple hundred yards of the closest one, dropped our packs and slipped down the mountain toward the herd. Pinned down, we couldn’t decide what to do; the bulls were moving, but if we tried to slip by the cows, they’d spook and take the whole herd with them. Eventually the cows moved off, the bulls shut up and we thought it might be the end of the hunt. Then I bugled and one of the bulls answered. He sounded small, so with nothing to lose we snuck toward him simple to video.

He turned out to be bigger than we thought and the video session quickly turned into a hunt. Some cows spooked, but the bull was confused. I did a few cow calls and he stopped about 60 yards ahead of me. Then another bull bugled behind us, and then again 20 seconds later about 100 yards away. He was heading our way fast and we quickly decided to switch our attention to him.

Moving into a better viewing position, I was shocked to see the bull coming full tilt at me at only 20 yards. It was all I could do to get my release on the string and jerk the bow back before he was on us. At first the sight pins floated wildly in and out of my peep sight, until a quick self-talk (“Craig, get your $#!% together!”) brought me into focus. It was just in time. The bull sensed something at 10 yards and came to a screeching halt. Too late for him my pin found the front shoulder and the arrow was gone. He immediately bolted and I saw a spot right where I aimed. I had my bull and TJ videoed the whole thing.

Erring on the side of caution, we marked the spot on my GPS, left some gear and retreated back up the mountain to retrieve our packs. Giving the bull time to expire, we returned to find him tangled in a tree on a steep rocky hill side. We had to cut the tree down to get to him. Then he rolled further down the face and ended up in a creek bed. It was quite a recovery.

In the remaining daylight we took pictures, butchered and started hiking out with some meat and our packs. We made it back to town at about 11:30 p.m. After a few hours of shuteye, Dad met us at daylight to go back in with the goats. We packed meat all day and made it back to the truck at dark with three people, four pack goats and one tired dog.