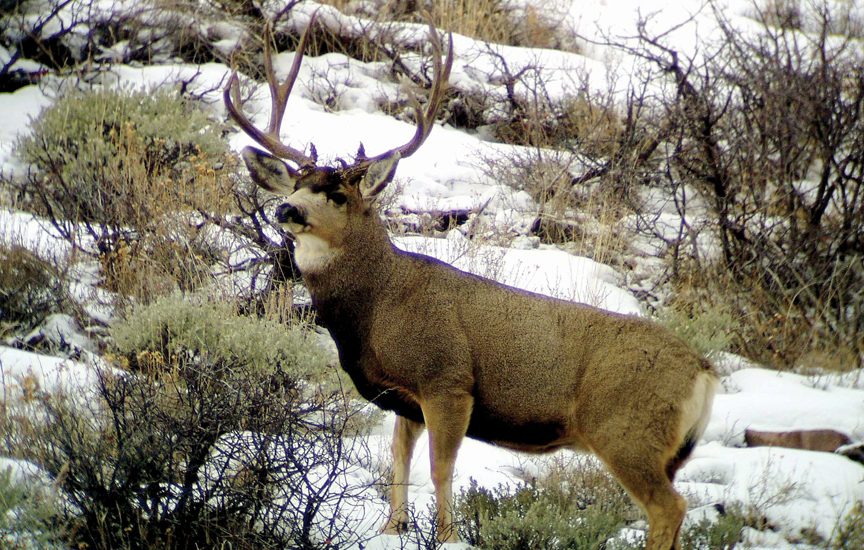 The decline in the White River mule deer herd has been a focal point of concern in Rio Blanco County as hunting season approaches and the Colorado Division of Parks and Wildlife has taken notice.

Biologist Darby Finley, mammals researcher Chuck Anderson and Division of Parks and Wildlife managers Bill de Vergie and Bailey Franklin have ideas about how to improve the herd numbers and want the community’s thoughts.

The four Division of Parks and Wildlife officers met with more than 70 people June 20 at the Rio Blanco County Fairgrounds and plan to host additional meetings in the future.

The White River deer herd, Finley says, has declined between about 30 and 40 percent since 2000.

The Division of Parks and Wildlife is in the process of instituting studies to fix the problem, Finley adds, but there are no quick remedies.

“There are problems with habitats, predators, oil exploration and other things to take into consideration,” he says. “A lot of what we are going to do will require monitoring and time to see trends.”

At the June meeting, Franklin discussed varying types of habitat manipulation the Division of Parks and Wildlife is experimenting with enacting. The changes in habitat, he says, are to provide better forage for deer.

“A lot of people here hate sagebrush, but it keeps deer alive in the winter,” Franklin says. “This is more art than science and we are learning as we go.”

While the deer are at high elevation during the summer, they stay at lower elevation in the winter, so transition ranges also are taken into consideration when it comes to habitat changes.

Anderson says habitat development studies would go into 2016 and possibly 2018, allowing the Division of Parks and Wildlife enough time to get comprehensive results.

“Deer travel in small packs, so we want to monitor several small patches in a large area,” he says. “We want to be able to protect against the factors that are limiting the deer herd numbers.”

Although the Division of Parks and Wildlife officers discussed habitat for a majority of the June 20 meeting, people in the audience were generally more concerned with how predators, such as coyotes, affect the numbers.

Finley says there is simply too much land to cover if the Division of Parks and Wildlife decided to take on predators.

“If fawns didn’t die from a coyote, they would die from malnutrition during the winter,” he says. “We don’t have the tools to effectively cover such an expansive geographic area.”

The biggest fallout from the decline, Finley adds, is limiting the number of licenses that can be handed out.

“We have to be more conservative with the number of licenses we hand out so the number of deer don’t decline even more,” he says.

“There will be fewer number of hunters out hunting these deer, and hunters don’t want that and neither do we.”

Stan Wyatt, owner of Wyatt’s Sports Center in Meeker, says a majority of his store’s business has come from hunting gear since it opened in 1995. The decline in licenses, he adds, will affect the equipment he sells.

“With the slash in the number of tags the state has handed out, we’ve seen less hunters in this area,” he says. “A lot of people come to hunt deer and elk, but if they can’t get a deer tag, they may go somewhere else, and we’ll then have less business from hunters.”

Wyatt’s store sells everything except firearms, including boots, clothing, ammo and binoculars. “Hunting is a big attraction for a smaller town,” he says. “With the combination of fewer licenses and the economy, we’ve seen fewer hunters each year for a while.”

The problem isn’t just in Rio Blanco County, de Vergie adds. The White River deer herd is the biggest in the state and hunters also touch economies in other Northwest Colorado counties.

“This deer herd is extremely important to the Division of Parks and Wildlife,” he says. “We don’t have all the answers by any means, but we’re taking many factors into consideration.”