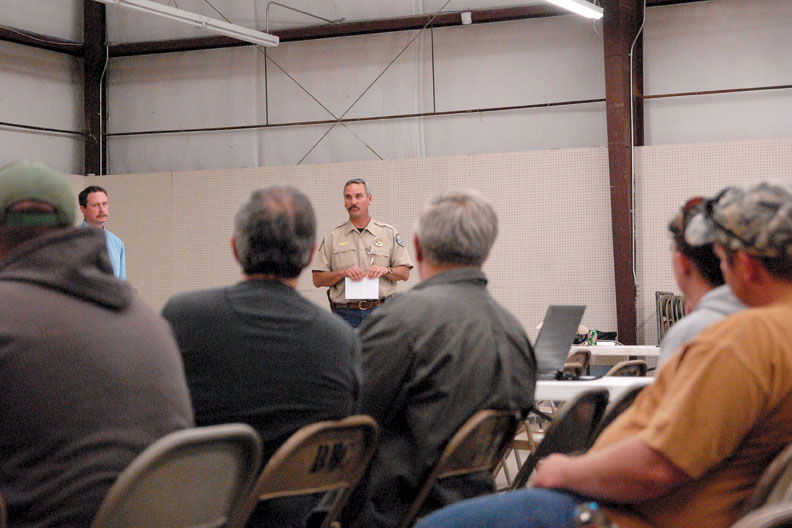 “A lot of people here hate sagebrush, but they keep deer alive in the winter. This is more art than science and we are learning as we go.”

— Bailey Franklin, a Colorado Division of Wildlife district manager, on the importance of forage for the White River deer herd

Finley told those in attendance that the White River deer herd has declined between 30 and 40 percent since 2000.

The DOW is in the process of instituting a few studies to fix this problem, Finley said, but nothing will be instant.

“There are problems with habitats, predators, oil exploration and other things to take into consideration,” Finley said. “A lot of what we are going to do will require monitoring and time to see trends.”

Franklin discussed different types of habitat manipulation the DOW is experimenting with. The changes in habitat, he said, are to provide better forage for deer.

“A lot of people here hate sagebrush, but they keep deer alive in the winter,” Franklin said during his presentation. “This is more art than science and we are learning as we go.”

While the deer are in high elevation during the summer months, they stay in lower elevation for the winter, so transition ranges are also taken into consideration when the habitat changes are discussed.

Anderson discussed the habitat developments further, saying the studies would go into 2016 and possibly 2018 in order for the DOW to get comprehensive results.

DOW officers discussed the habitat for a majority of the meeting, but those in attendance seemed more concerned with how predators, such as coyotes, impact the numbers.

Finley said there would be simply too much land to cover if the DOW decided to take on predators.

“If fawns didn’t die from a coyote, they would die from malnutrition during the winter,” he said. “We do not have the tools to affectively cover such expansive geographic area. It would not be cost prohibitive.”

The biggest fallout from the decline, Finley said, is limiting the number of licenses that can be handed out.

“We have to be more conservative with the number of licenses we hand out so the number of deer don’t decline even more,” he said. “There will be fewer number of hunters out hunting these deer and they don’t want that and either do we.”