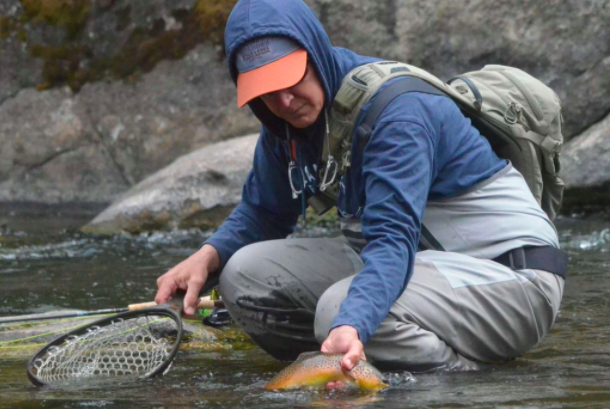 Keith Hale thinks fishing in the Yampa Valley has started off different this year. Normally, the river is higher as the snow rapidly melts, making it cloudy and difficult to fish.

“It is usually chocolate milk out here,” said Andy Best, a fishing guide at Steamboat Flyfisher.

Initially, as the snow in the valley melts, the water gets cloudy, but that was back in March. Hale, also a guide at Steamboat Flyfisher, said now the water is more ice tea colored because it is getting colder at night, and the snow high in the mountains is taking longer to melThat is good for fishing right now Hale said, but he is worried about what will happen later in the summer. He recalled there used to be an afternoon shower every day, but it seems like years since that has happened.

Two of the last three years, anglers have been asked to stay out of the river later in the summer, in part because it puts too much pressure on the fish. Outlooks for this summer indicate it will likely be both hotter and drier than normal.

Anticipating a potentially tough summer, the Steamboat Springs Parks and Recreation commissioner has opted to limit the number of outfitters permitted to guide on the Yampa to seven.

As trout are a cold-water species, they thrive with water temperatures below 65 degrees, said Patrick Gamble, a guide with Straightline Sports in Steamboat. Warmer water has less oxygen, and the warmer the water, the higher the mortality rate is for fish that are released.

“For the long-term health of the river, to keep those fish alive, we back off of them once water temps exceed that critical threshold,” Gamble said. “I’d argue that the Yampa River fish are pretty darn resilient.”

Hale said another metric they look at is the flow of the river. When it gets below 85 cubic feet per second, it puts a lot of extra stress on the fish. Trout generally feed in moving currents of about 2 to 4 feet deep, but they rest in deeper pools where they don’t have to fight the current.

Visit SteamboatPilot.com to read the rest of this article.