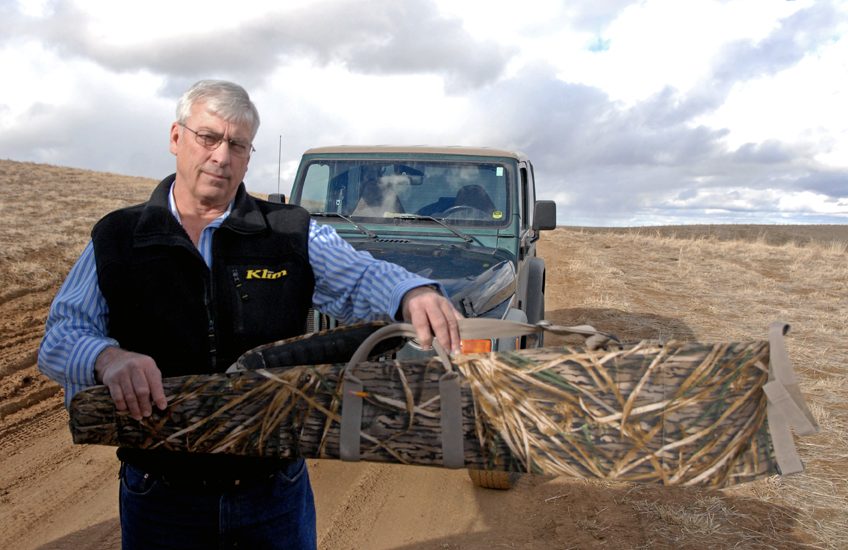 “Tyler won’t let me talk bad about who ever did it, he’s actually excited for us that we were able to come back here. But we’re doing this (offering a reward) because we don’t want to feel 3, 4 or 20 years down the road like we didn’t do enough.”

— Dan Rast, father of Tyler Rast, about his son being the victim of a nonfatal hunting accident last month in Moffat County.

But they can also have devastating affects on people’s lives.

In the case of visiting hunter Tyler Rast, 38, of Bountiful, Utah, a bullet that missed its intended target and struck him in the arm last month has not only resulted in unique physical challenges, but also has weighed heavily on the emotions of his family.

“Accidents can change lives and in this case it has,” said Kent Rast, Tyler’s uncle. “It’s really affected the family.”

On Thursday Kent and Dan Rast, Tyler’s father, both also of Bountiful, returned to the scene of what Moffat County Sheriff’s Office deputies are investigating as an accidental shooting.

The purpose of their visit was two-fold, to search for some sense of closure and to offer a reward for any information that may lead to the identification of the responsible party.

With small herds of mule deer does and their fawns dotting the landscape Dan spoke of safety, referencing Charles Alsheimer’s “Five Stages of the Deer Hunter.”

Stage 1, Dan said, is comprised of first-time hunters who are usually young, competitive and hunt with a lot of emotion. For hunters in this early stage success is only achieved through harvesting an animal.

Stage 5 hunters, on the other hand, are older, patient and more mature, Dan said.

Both Dan and Kent think they’ve grown into stage 5 hunters who measure success differently than their younger counterparts.

“Sure we want to harvest an animal, but for us hunting is much more about spending time in this beautiful high-altitude desert environment with our friends and family,” Dan said. “Making a kill is much more of a bonus to us now than a priority.”

Dan suspects the person responsible for shooting his son is probably a stage 1 hunter.

He’s hopeful, upon hearing their story, that the shooter will step forward to claim responsibility.

“Tyler won’t let me talk bad about who ever did it, he’s actually excited for us that we were able to come back here,” Dan said. “But we’re doing this (offering a reward) because we don’t want to feel three, four or 20 years down the road like we didn’t do enough.”

It was cold, clear and there were a lot of hunters in the area when Tyler and his father set out to stalk mule deer in Game Management Unit 3 in northeastern Moffat County.

Though Kent visited the scene with Dan this week, he was not a part of the hunting party.

Tyler and Dan carried private land vouchers, but they knew they needed to travel through a small section of BLM to get to the area they planned to hunt.

They traveled east in separate ATVs on Moffat County Road 109, a mile and a half from CR 3, when a doe bounced across the road about 200 yards on the horizon, Dan said.

A shot rang out, presumably intended for the doe, and struck Tyler, blowing a cucumber-size hole out of the back of his forearm, Dan said.

Dan and Tyler were about 10 minutes into their first day of hunting at the time of the accident.

Tyler received equal shares of good and bad luck at the moment he was shot, Dan said.

Because there was so much deer activity, Tyler was standing on his ATV at the time of the shooting. Had he been sitting down the bullet could have easily struck him in the shoulder or the chest and he would have been dead on the spot, Dan said.

Conversely, Tyler was transporting his scoped deer rifle in a soft case secured to a gun rack located at the front of his ATV.

In addition to piercing the soft gun case, the bullet managed to travel through the tiny space between the scope and the breech of the rifle before striking Tyler in the arm.

But Dan wasn’t thinking about good or bad fortune at the moment of the accident, he was focused on his son’s survival.

After Dan outfitted Tyler with a tourniquet he rushed his son to The Memorial Hospital in Craig, where he received preliminary treatment before a flight for life helicopter transported him to St. Mary’s Hospital in Grand Junction.

Tyler then checked into the University of Utah Medical Center for two more rounds of surgeries.

During the most recent surgery doctors removed his left fibula and some leg muscle, and transplanted it into his arm.

“He’s on the mend now, he hasn’t had any setbacks, but it’s just going to change his life forever,” Dan said. “He can just barely move his arm, but at least he’s alive.”

Tyler is the vice president and general manager of Beehive Brick & Stone in Salt Lake City.

He has two children, a son and a daughter, with a third on the way.

Dan describes his son as smart, really well liked, a good church and family man, and an avid outdoorsman.

But Dan knows this experience may alter his son’s views about hunting.

“He thinks his whole outlook is going to change a little bit,” Dan said. “He thinks this could be a game changer.”

So far the Moffat County Sheriff’s Office investigation has yielded a spent cartridge and deputies believe, through a flight pattern analysis, they know from where the shot was taken, but no suspects have been identified at this time.

And with 26,000 license applications in 2012 — from people all over the country — for GMUs 3 and 301 alone, it’s likely the shooter will not be found unless he steps forward or deputies receive new information.

Though Dan was advised not to report how much, he did set up a reward fund through the Moffat County Public Safety Center Crime Stoppers hotline.

Anyone who has information, no matter how insignificant it may seem, is encouraged to report it by calling (970) 824-3535.

“We understand, Tyler understands mistakes happen,” Dan said. “But mistakes need to be paid for too, though we’re worried this may never come to fruition.”