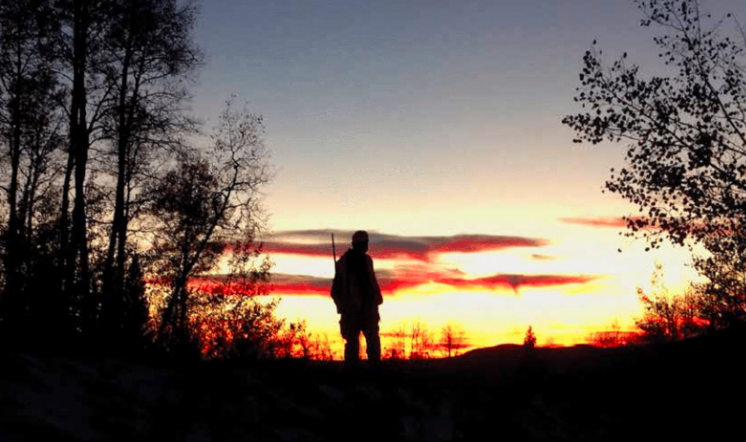 After a long, dark period of hibernation holed up in their dens, bears eventually emerge, scratching their bellies and ready to fill them with food and maybe a little adventure.

Pat Grieve expects the hunters he serves to act exactly the same way this fall.

“The hunters have been cooped up,” said Grieve, owner and operator of Snake River Outfitters near Craig for 40 years. “And I think they want out. They want activity.”

Grieve believes hunters will show up in northwest Colorado this fall despite the coronavirus, or maybe because of it. Not everyone agrees with him, and even the usual display of sunny optimism from the local Chamber of Commerce was replaced by warnings of a down year. But most, like Grieve, are optimistic that this will be a good year, perhaps even better than some.

“We’ve had less than 10 percent show any interest in cancellations,” he said in early June. After all, Grieve argues, if you’re going to do something, hunting is a perfect activity for a pandemic. And lord knows we all need something.

Snake River Outfitters offers 100,000 acres of hunting ground. That’s a lot of elbow room. And hunters kind of need to avoid each other anyway.

“Hunting is the epitome of social distancing,” Grieve said. “And I think that’s what hunters are looking at.”

Rick Brady of Greeley has rheumatoid arthritis, but he hunts antelope every year with the help of Outdoor Buddies, a non-profit that helps hunters with limited mobility enjoy the sport. He’s not about to let the threat of a virus stop him from doing what arthritic pain never could.

“We’ve got 60,000 acres between three or four relatives,” he said. “I don’t know how you can get more socially spaced than that.”

Concern for the culture

Last spring, Colorado Parks and Wildlife officials were admittedly worried about turkey season. The virus had just emerged and was sweeping across the nation, sickening hundreds of thousands, killing many and canceling anything fun in its path. Since CPW relies on license fees to pay for the bulk of its wildlife programs that help all wildlife — not just the animals hunters aim for — even a 25 percent drop in turkey tags would be tough.

But it was a pretty good season. Andre Egli, a hunter education coordinator for CPW, even went himself, leaving his wife, Crystal, who also loves hunting, back home. She was too nervous to go, but he stayed away from others by filling his gas tank and a cooler before heading out to hunt in a remote and familiar location.

“People who live (in Colorado), they go to the same spot year after year and hunt in the same area,” Egli said. “Maybe those who live out of state will say, ‘Well, maybe this is the year I won’t go.’”

That potential loss of out-of-state hunters is exactly why officials from the Craig Chamber of Commerce are concerned. Craig caters to those visitors looking for a once-in-a-lifetime elk hunt, the kind that inspires people to apply 20 years for a tag. The Western Slope prides itself on its elk hunting, and that’s especially true in Craig and nearby Meeker.

“We have one of the largest elk herds in the world,” said Jennifer Holloway, executive director of the Craig Chamber of Commerce. “It’s part of our culture. It’s part of our identity.”

Hunters typically begin calling the Chamber around April to prepare for their hunts, Holloway said, and in return, the chamber sends out packets of information and sells maps in the lobby.

“We will talk through their hunts and help them make plans,” she said.

But those calls are down this year, she said, and that’s led her to warn the hunting industry that this year may be different despite all the optimists.

“This year I have noticed a drastic decrease,” Holloway said in late May. “I hope that will pop back up as our public lands open up again. But I think, to be realistic, everyone in that industry needs to plan for a decrease.”

Craig’s economy enjoys the cash infusion that hunting brings every fall, and that economic injection has grown the last few years, as aging hunters want to stay in more hotels, dine out and invest in guided hunts. But while their spending is up, overall hunter numbers are decreasing, a trend acknowledged years ago by the industry. Hunting is a part of the 12th largest industry in the area, Holloway said, and 12 percent of all visitors are hunters. She recognizes their value and is working to keep those numbers from slipping any lower.

“We saw them when I was a kid; it really was a horde,” Holloway said. “We’re working on invigorating hunting and outdoor recreation and tourism in our area.”

Hunting may promote social distancing, but many may still need to travel to get there. Even a few hours by car can make people nervous — the coronavirus did kill more than 100,000 Americans in just a few months — and many hunters need to travel across several states to get to places like Craig for elk, one of the more prized big game animals in the world.

“This whole area is a mecca for elk hunters,” said Scott Moore, who owns Mountain Man Taxidermy in Craig. “We get a ton more than anywhere else in the country really. But how do you navigate across five states?”

Hunters may have a certain independent kind of bravado about them, but they are still concerned about getting sick, Grieve said.

“I think there are things they are scared of,” he said. “The people I’ve talked to are scared of flying and staying in hotels. They are readjusting.”

Many of his clients are bringing their own campers, even though Grieve’s clients usually stay at his on-site hunting cabins. Grieve is already planning to install RV plugs as well as hire extra staff to do nothing but clean places where his guests eat. It will be an added expense, he said, but his phone continues to ring, and he’s booked 18 months in advance, so he’s happy to make the changes.

“We are fortunate that we can do all that,” Grieve said. “Some outfitters won’t be able to.”

The virus scares the owners, too, including Aleka Butler, the owner of the Y Lazy S Ranch near Craig.

She welcomes the hunters, however, and wants them to stay and hunt on her land. She’s had many cancellations of weddings and other events already this year, but hunters have remained steadfast. Likewise, hunters like Moore have heard from many friends who don’t plan to stay home.

“Pretty much all the guys I know who come out are planning to come out,” Moore said. “The outfitters are booking up like normal. There have been a few worried about the safety of the travel, but not to the point of cancelling their hunt.”

The virus scares whole towns, too, including the eastern Colorado town of Yuma that wanted to cancel its popular spring turkey hunting season. The town really doesn’t have that power, but CPW compromised by giving the Yuma its own special season, essentially delaying it and making up the days in the back.

“I hope hunters respect the wishes of those small communities,” said Crystal Egli, whose mother is a doctor. “They don’t have the resources for COVID outbreaks, so bringing it into them wouldn’t be that great.”

Counties don’t control hunting seasons, but they do have some control over who is allowed within their boundaries, said Randy Hampton, a Public Information Officer for CPW. During the 1918 flu epidemic, Gunnison just blocked the roads. Nearly all hunters would honor a request from a county to stay away, Hampton said, but the CPW hopes county officials discuss that kind of drastic action with them before they take it.

“We want to be part of that discussion,” Hampton said. “Our wildlife officers are biologists as well, and they have as much knowledge as anyone, even about things such as viruses, and they understand how hunters act. They want to be at the table should those hard discussions arise.

“I hope we never have those conversations. I think the formal discussions about this are relatively tinged with great hope that everything will be OK.”

Everything was OK at press time in early June, a few months before the early archery season starts to bleed into fall and hunters start to clean their rifles. Things change nearly every day, but most remained optimistic.

“When the stuff hit, I was concerned that my clients would have a bit of a freakout,” said Josh Wombolt, who primarily guides out-of-state visitors with Avalanche Outfitters in Redstone. “But everyone I’ve talked to said, ‘As long as I don’t get arrested for hunting, we will be there,’”

Some have even reported larger crowds in the field. Paul Patton, 45, of Colorado Springs, hunts with his wife and two adult kids. He hunted for turkey this spring, and he talked to four others who were on furlough from their jobs.

“They had never hunted turkey before but wanted something to do,” Patton said. “Turkey hunting this spring was ridiculous with the number of hunters in the woods. I was glad to see that, but there wasn’t a lot of privacy. I hope the big-game seasons are not overwhelmed.”

Holloway, the Chamber director, still expects a lighter season, but she also knows too many hunters and their fiercely independent ways to count them out.

“I expect that if anyone will go out and do what they want,” she laughed, “it will be them.”

Butler of the Y Lazy S Ranch continued to make preparations to see her usual crowd of hunters come this fall, when they should emerge from hibernation hungry and ready for an adventure.

“Hunters are looking forward to getting the heck out of their populated areas and coming here and enjoying the country,” she said.