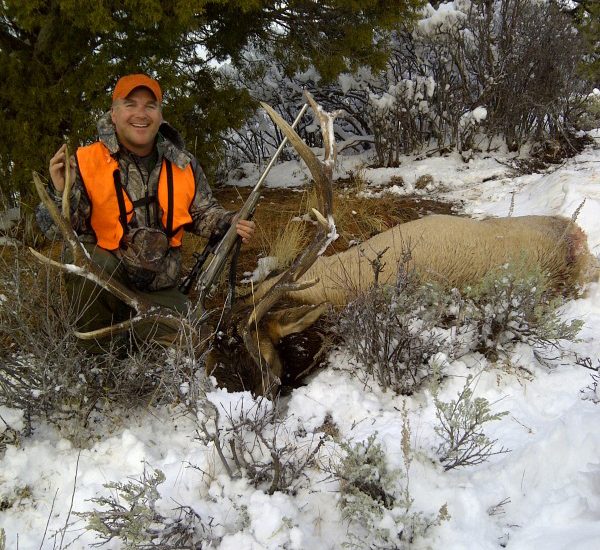 Colorado’s 2011 third rifle season arrived with the first snowstorm of winter. On that Saturday morning, we woke to fog and rain, turning to snow at our camp. Not wanting to start off the elk season by ATVing and hiking in the slop, and not being able to see through our binoculars, we drove to higher elevation to eye a break in the storm and find a different place to glass.

No luck. The higher we drove, the more things looked like an episode of “Ice Road Truckers.” After stopping on a pass and chatting with another hunter, we turned back. Neither of us was excited about tromping around in the slop only to get wet and miserable.

Sunday morning was clear and the ground was frozen enough to get around without getting sloppy so we headed up a closer trail, hiking and glassing our way up the mountain. We spied a small herd down on some private land. We knew they were un-huntable from our terrain today, but they were fun to watch nonetheless.

Working our way up, we saw a couple cows here and there off the trail, but we weren’t excited about packing one out so far this early in the season.

The shadows grew long as we worked our way back down the trail in the late afternoon. We opted for one last stop and hiked out a spur ridge closer to where we had seen cows in the morning.

As I was glassing higher where the cows had been, Shawn spotted something below us. “There’s a bull…There are THREE bulls together! One of them is nice.”

Dan and I had bull and cow tags, Shawn just had a cow tag. Dan and I each sat down and readied for a shot while watching the elk walk away. I passed my rangefinder to Shawn and asked “What do you think, about 400?” The elk were quartering away, getting farther with each step through some sparse trees. But they weren’t spooked.

Shawn called out the ranges: “520 to the far bull. The middle one is the biggest.”

Dan was having a hard time getting situated, plus that was a bit far for shooting off the cuff. Living in Grand Junction gives you the luxury of shooting desert rocks at 1,000 yards as often as you care to practice. Dan and Shawn, living on the Front Range, don’t have that luxury. He handed me his shooting sticks. I wasn’t going to argue with him if he wasn’t going to shoot. I still wasn’t positive I was going to, either. I got them set up and watched the bulls through my scope.

“540!” called Shawn. The elk were still walking so I dialed my scope turret to the 550 yard mark. The air was calm, I wasn’t winded, this could work. I flicked off my safety and followed the center bull in and out of the trees. He was pretty nice, a big five or even six-point. There … an opening … he stood apart from the other two … BOOM!

“He’s down!” Shawn said. The bull dropped, but his head was up. I could still see his antlers moving a bit. The other two elk had turned a 180 and were heading back up the ridge getting closer now.

Now Dan was down with his sticks readying for a shot. I told them, “I’m watching mine, I saw him moving. You’re on your own, sorry guys.”

I could tell what was going on just listening to them. “They’re working their way up the ridge. Shoot the one in back, he’s got a big drop tine, he’s cool!” Shawn still was calling out the ranges as they got closer. But the closer they came, the thicker the trees got and the worse the shooting opportunities became.

At about 250, the other two bulls slipped into the trees never to be seen again. Dan never did get a clean shot, and I was proud of him for not shooting and risking a bad shot. Shawn guided me to the bull while Dan went back to the rigs and got some gear. We figured we’d be out here well after dark now. I made it to the elk and then called Shawn in.

We were about halfway done by the time Dan worked his way up from below. Dan’s trip up turned out to be tougher than it looked from the top of the ridge. A foot of snow, oak brush, juniper and pitch dark will make the most pious of hikers cuss like a sailor.

About four hours later back at camp, when I got feeling back in my hands, we all swore over a bottle of Jack that we’d never, ever, pull a stunt like that again. Packing elk meat on your back is surely better than dragging a quarter through the snow in the dark; a nice round elk shoulder transforms itself into a sage-clinging, barbed grappling hook that will fight the dragger every inch of the way, even downhill.

Monday morning we went back up and carried the rest of the elk meat down to the trail. Dan and Shawn kept hunting while I had to bug out by noon. I loaded the two quarters onto my ATV and headed downhill.

I learned long ago to pack heavy loads on the front when going uphill and the back when going downhill. At some point, however, I unlearned this important fact. I still don’t know what I was thinking as I motored down the mountain willy nilly with one load on the front and one on the back. Probably something to the effect of, “Yeah, I killed a big bull, I’m bulletproof, laws of physics don’t apply to me.”

But I do remember what I was thinking the instant my front right tire slid down a wide flat rock and the rear end rose like a teeter-totter under me. It all happened in ultra-slow motion. The ATV was going over and there was no stopping it. So I hopped off and let it go. Then it rolled at me like the big rock from Indiana Jones.

Sitting there on my butt, I gave my Honda a kick and it rolled past me. Then … it kept going! I imagined it tumbling a mile down the hill. Thankfully, it gave another half roll and stopped.

I radioed the guys to come give me a hand tipping the rig back up. We loaded all the elk meat onto the back of the Honda, and down the mountain I went.

I showed back up at hunting camp early Tuesday morning bearing fresh doughnuts. We hit a different trail, hiking, riding, glassing and seeing a few elk off in the distance. Again, after getting out as far as we dared and as we were contemplating the trip back, we spied some elk close enough to hunt.

One spike bull lay bedded in the oak brush 450 yards away. We glassed hard, picking apart the brush around him and sure enough, we found a leg here, an ear there. Turns out there were a handful of elk in that pocket. No legal bulls, but Shawn and Dan were both game for taking cows. Besides, you never know what you might not be seeing.

There wasn’t a good shooting spot, but parallel to our line to the elk a spur ran down off our ridge where we could hike and reduce the range. We’d just have to be sneaky.

We picked our way down the backside of the spur to a spot about 350 yards from the elk and the boys got set up. I sat between them to spot and call the ranges. Shooting sticks were out, breaths were calmed, safeties were off … BOOM, BOOM, and BOOM! Shawn dropped his cow but Dan’s ran off.

Wednesday, as we were packing the meat back up to the ATVs, we decided the elk were 450 yards horizontally from the trail, but also 450 yards of vertical from the ATVs. We need to dust off the “hunt up from the trail” rule because hunting down means packing up. It’s no wonder my knees sound like Rice Krispies when I climb stairs.

But all in all, we had a blast. I can’t wait to do it all again next year. Well, almost all.