It’s 6 a.m. and archery hunters Ed Watson and Matt Hammer are approaching their destination after a 2,000-vertical-foot climb in the Park Range. They’ve arrived quietly — no animal-scaring noise from the likes of an ATV — and are barely huffing and puffing. 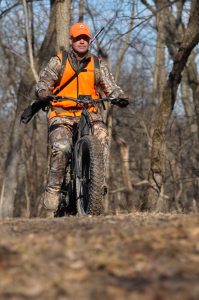 The secret? They used E-bikes, in particular electric bicycles from Vail, Colo.’s QuietKat, a vehicle fast making such traipses into the woods for hunters a walk in the park.

“We thought, ‘Let’s see what these babies can do,’” says Watson, an archery hunter out of Steamboat Springs. “It was more of a fact-finding mission, but they worked great.”

While the bikes still require users to pedal, a built-in electric motor offers assistance, in a variety of different levels. Use a moderate setting for minimal assistance and a higher one for more help.

“They’re great because you’re not sweating and smelling when you arrive,” says Watson, adding it took them only 40 minutes to get up to the top, equipped with bows and daypacks. “Plus they don’t make any noise.”

The E-bikes they used, borrowed from a friend, were QuietKats out of Eagle, Colo., an advanced Low-Speed Electric Vehicle (LSEV) company that manufacturers “outdoor recreation specific” electric fat-tire mountain bikes. Lithium-ion batteries supply clean, green and silent power for all types of pedal-assisted riding, all geared toward those who want non-obtrusive access to the backwoods for hunting, fishing and camping.

“They enable users to access the wilderness in a fast, fun and sustainable way,” says QuietKat CEO Jake Roach, who founded the company in 2012. “And, of importance to hunters, quietly.”

Roach estimates that about 80 percent of their bikes are used by hunters, both bow and rifle. “Regardless of the weapon they’re using, hunters are using them for remote backcountry access,” he says.

Sold wholesale through more than 60 retailers, including the likes of Straightline Sports in Steamboat Springs, the bikes come with an extra small cog up front — giving it “more of a granny gear for going up hills,” says Roach — as well as proper gearing for the wilderness. “Our components are ideally suited for hunting terrain,” says Roach, singling out its Apex and Predator models for hunters. “It’s a modern-day horse.”

The bikes also offer such add-ons as racks, bags and even trailers for game, as well as a red LED light called The Hunter. An internal circuit board emits a red LED light (“Animals can’t see red,” Roach says), with the ability to switch it to white when needed.

All this is helping the company develop a growing hunter following, with sales up about 70 percent every year since its founding.

“Using E-bikes for hunting is following the general growing E-bike trend, all due to their advantages over four-wheelers,” Roach says, rattling off such advantages as no emissions, no scent and no noise. “They let you get into the backcountry stealthfully and totally unannounced.”

No one knows this better than Watson and Hammer, who plan to up their own hunting game with them again this season. This year Watson plans to use them to ride three miles in to his tree stand on Rabbit Ears Pass, this time complete with camping gear, food and other supplies for a multi-day hunt. ”We’ll use them again for sure,” he says. “They’re a pretty incredible tool for hunting.”