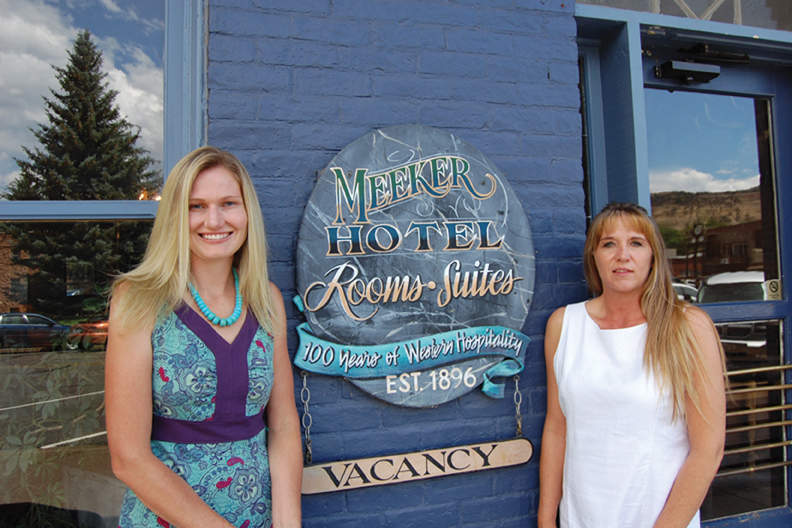 Meeker Hotel at a glance:

One area hotel lays claim to housing them all, and after 126 years in business the Northwest Colorado establishment still attracts crowds in droves.

With its blend of turn-of the-century aesthetics and modern-day creature comforts, The Meeker Hotel provides an ideal getaway for hunters and tourists from out-of-state as well as within.

Founded in 1886 by pioneer Susan C. Wright and partner Charlie Dunbar, an adobe building that served as housing for soldiers in the area was passed onto Wright’s brother, R.S. Ball, after her death in 1893.

Ball improved the business, erecting in 1896 the building that stands today at 560 Main St., and adding onto it as the years went by with popularity growing.

Though ownership has changed hands many times in the last century, the current owners are James and Kimberly Ritchie, who focus on promoting the two big H’s of the establishment: hunting and history.

Hunting enthusiast James bought the hotel in 1996, the 100th anniversary of the building.

Kimberly, who married him five years later, fell in love with the property immediately.

“What I love about the building is the stories, the fact that The Meeker Hotel is something so much larger than the people that are a part of it,” she said. “It has the years to stand alone, separate from the everyday.”

The names associated with the hotel are still pretty big.

“High Noon” star Gary Cooper and wild west legend Billy the Kid are among the famous guests of years past, both of whom lend their names to rooms within the building, though rumors swirl if the signature of William H. Bonney — Billy the Kid’s alias — was actually penned by the gunman, who supposedly was killed in 1881 by Pat Garrett at age 21, or one of the several impostors known to use the name in following years.

Another room namesake is President Theodore Roosevelt, who famously bagged a 227-pound mountain lion near Meeker in 1901, setting a Colorado state record that stood for 100 years.

“With Teddy, he was also known as a great conservationist, and it’s nice to be associated with him that way,” Kimberly said.

Roosevelt’s love for the outdoors lives on with the clientele The Meeker Hotel serves. Seeing a steady stream of guests year-round, the business is already anticipating the hunters who make up its main trade.

“We’ll have people making reservations in the spring and then another rush of people planning in August every year,” Kimberly said. “The beginning and the end of the season are always real packed.

“Many of them are out-of-state repeat customers, and it’s fun forging those relationships with people that enjoy the area because this is their vacation and we enjoy offering that kind of Western hospitality.”

Though she’s never kept an exact count year by year, Kimberly said “hundreds upon hundreds” of hunters pass through the hotel each hunting season, some of whom aren’t even guests.

“A lot of them just come to stare,” she said.

The hotel lobby is a museum unto itself with items like a chair made from antlers, which is strictly to look at and not touch.

Besides an alcove containing historical photos of prestigious guests and memorable Meeker moments, onlookers can get an idea of what kind of wildlife they can find in Northwest Colorado, with mounted deer and elk heads high above stuffed critters like foxes, coyotes and porcupines.

Some of these animals have been part of the decoration for only a few years, while others have been around much longer, as evidenced by a moose head provided by James, which stares at a moose shot by R.S. Ball on the opposite wall of the hotel’s adjoining cafe.

Each of the two dozen rooms are styled differently, some decorated in honor of the person after whom they’re named or others with unique furnishings like canopy beds or claw foot tubs in the bathroom.

An upstairs lounge also allows for guests to socialize.

“It’s different than when you’re in a hotel with numbered rooms and nobody interacts with one another,” Kimberly said. “The hunters tend to get to know each other because they all love the animals and the history and area and the outdoors.”

Another aspect of the hotel is one which gives a different meaning to history coming alive: ghosts.

Over the years, many guests and staff claim to have seen the ghost of founder Charlie Dunbar lurking around, as well as another specter identified only as “The Painted Lady.”

Kimberly said some tourists have frequented the business for the sole purpose of seeing the spirit who has been described by the lucky few to see her as a woman with lots of makeup and clothes from the early 20th century.

“The only real thing we know is her room always smells like perfume, like the kind from the 1910s, and we always have some trouble with the door,” she said. “We haven’t really done many renovations to her room because she likes it that way.”

Kimberly said she is skeptical about being haunted, but her general manager, Nancy Sturgeon, sees it another way.

“It’s really their home and we’re just using it,” she said.

Sturgeon said she has loved The Meeker Hotel since she began working there four years ago because of the kind of feeling she gets thinking about its long history, one which she enjoys sharing with guests.

“It gets in your blood, and it just doesn’t let go,” she said. “You’re never alone when you’re here, and I just don’t think anything could be replicated because it’s not just bricks — it’s about what’s here and what’s happened here.”