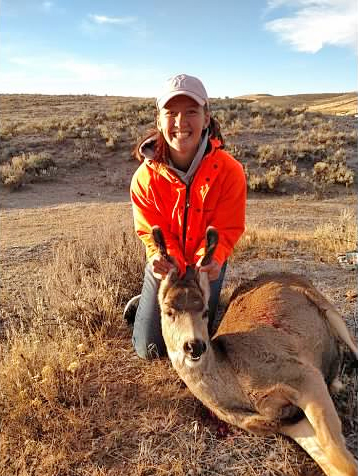 You only get one hunting story about your first time claiming an animal, and Tehya Johnson will have a good yarn to spin for years to come.

During Johnson’s first hunting season in October 2015, the teenager stuck close to home.

Very close — specifically right in the driveway of her family’s house near Cedar Mountain, about five miles north of Craig in Northwest Colorado.

Johnson was feeling nervous about her initial foray into the sport, unsure if she’d be able to complete the act of pulling the trigger when the time came. With Game Management Unit 3 right outside her front yard, it made it a little easier, but wrapping her mind around it was still a little much once she spotted a deer.

“The first time I was shaking too hard to even do it. I was so scared,” she said. “I fired, and the deer ran off.”

Luckily for her, a wandered back her way again, and this time she was ready, all the anticipation having melted away as she took aim.

“It worked out really well, I got the perfect shot,” she said.

Though she got involved in hunting later in life than some, Johnson said her stepfather, Gary Cole, got her interested in the pursuit, which her mother, Shara, wholeheartedly supported, including the outing itself and the Hunter’s Safety courses that led up it that showed she was taking it seriously.

Hunting is an activity, Shara said, she’d like to see become even more prominent in her household, also getting her first taste last year.

Now 16, Johnson is prepared to go back into the field this year, this time with a cow tag.

Also, she and her family will be venturing to the Black Mountain area for this season’s trip.

“I’m feeling a lot more confident,” she said. “Just taking your first shot is the scariest part, and once that’s out it’s easy.”