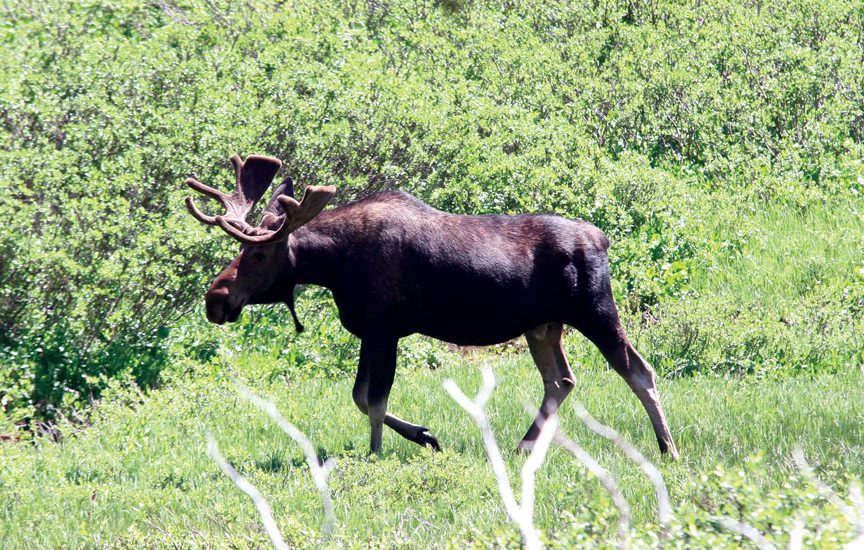 Want to bag the largest deer in the world? In Northwest Colorado, it’s entirely possible.

Since being reintroduced to the region — North Park, specifically — by the Colorado Division of Parks and Wildlife in 1978, moose have thrived in an environment seeming tailor-made for them. Valleys thick with willows, streams, ponds and marshes provide food and shelter for moose, considered by biologists to be the world’s largest deer.

The giant herbivores, which can reach 6 feet at their shoulders and weigh in excess of 1,000 pounds, love Northwest Colorado so much that their numbers continue to grow. In 2008 the wildlife officials transferred another group of moose to the Flat Tops Wilderness Area near Meeker. That followed a recent introduction of moose on Grand Mesa in 2005. For hunters, all this spells a good chance of success.

The North Park moose population is estimated at 510, and Middle Park boasts another 323. The Grand Mesa herd population is about 240, with an objective of 450.

Wildlife officials have begun a campaign reminding hunters to be aware of their target. Illegally shooting a moose because you thought it was an elk carries a hefty fine. The bill starts at $1,350.

How you know it’s a moose:

• A bell, or flap of skin, hanging from its throat

If you managed to score a moose license this year, be patient on your hunt; moose are relatively solitary and can be difficult to find. Stick to forested areas, particularly those near marshes and swamps.

Any area thick with willows, their primary source of food, is prime habitat. They’ll also eat pine needles and the leaves of deciduous trees as well as aquatic plants and aspen trees.

Your best chance of seeing moose is early in the morning or late afternoon. Be aware that they can be extremely aggressive, especially when startled, and are known to defend their home territory.