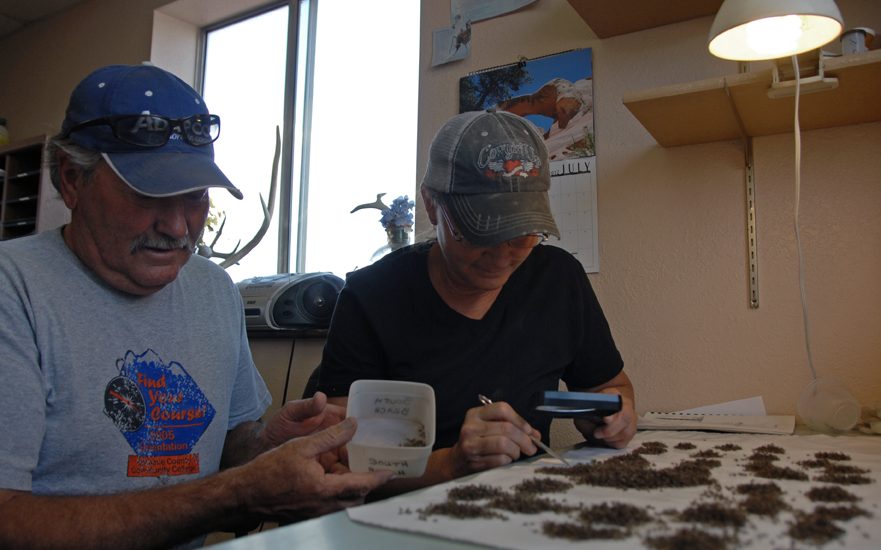 Although a common misconception exists among residents that there are fewer flying pests in Moffat County because of the weather, Brannan said mosquito numbers are down this year in large part due to the work of his pest management team.

On Tuesday Brannan, and pest control technician Pam Boyd, were comparing the results of two test traps the department set this week.

Moffat County pest management employees set mosquito traps twice a week to look for trends in numbers and to identify the various types of mosquitoes in the area.

Although there are dozens of subspecies, two main types of mosquitoes are prevalent in Moffat County.

The Ades, or flood water mosquitoes, are considered to be little more than pests.

Culex, or standing water mosquitoes, are the ones that can carry a variety of diseases including West Nile Virus, Brannan said.

“It’s nuisance and disease control,” Brannan said. “If we weren’t doing this no one would be able to use things like Loudy-Simpson Park, the golf course or other recreational parks because if you get into a bad area it’s difficult to stand there long enough just to set the trap up.”

The traps are baited with dry ice.

When the dry ice melts it gives off carbon dioxide confusing mosquitoes into thinking there is a large mammal in the area.

The mosquitoes are then attracted to the light and sucked into a mesh trap by a battery powered fan.

Earlier this week Boyd set a trap in an area not typically abated by the weed and pest management department, and caught more than 6,000 mosquitoes.

The following day Boyd set a trap in an area county employees had treated with Bacillus thuringiensis israelenis and caught 23 mosquitoes.

BTI is a naturally occurring organism that only affects the digestive systems of mosquito larva and black fly midges.

But BTI has no affect on mosquitoes already “in flight,” Brannan said.

On Tuesday the pest management department began its flyover operations in problem areas along the Yampa River.

Aerial applications are scheduled to continue through Friday.

To help contain mosquitoes, particularly disease spreading Culex mosquitoes, Brannan said there are a number of things people can do around the home including minimizing the amount of standing water in gutters, spare tires and abandoned pools.

Additional tips may be found in the resident’s guide to mosquito control, which is available at the weed and pest management office, 539 Barclay St.