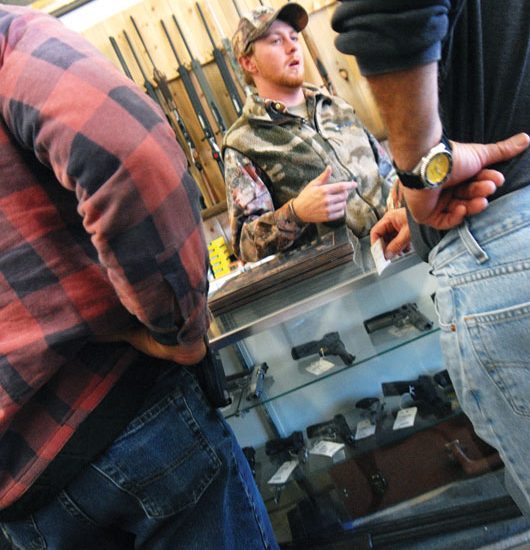 Improvements in accessories also are making hunting easier. Foremost among them, especially when hunting deer, are scent controls.

“Deer seem to be more sensitive to the things around them than elk, so scent controls can help cover something new to the environment,” says Kevin Rider, owner of Rifle’s Timberline Sporting Goods.

While people have been hunting big game for centuries, advances in equipment keep making it easier.

Foremost on the list, says Rifle’s Kevin Rider, owner of Timberline Sporting Goods, are rangefinders, which help hunters discover exactly how far away a target is and the path their bullet or arrow will take.

“Rangefinders help hunters become more accurate before they shoot,” he says. “They’re not necessary for all hunters, but they’re great for those who have a problem adjusting to distances between them and the animal.”

“A lot of hunters hunt from longer distances, so a rangefinder is great for when they’re 400 or 500 yards out,” he says. “But hunters need to stay within a distance that they feel confident at and practice at.

“If you can hit a range target at 200 yards, but get all over the place past that, you should stick at 200 yards when hunting,” he adds. “A rangefinder is great for letting you know exactly how far the animal is and to see if it’s within your practice zone.”

“If the trajectory changes from a straight shot to an uphill or downhill shot, the ARC technology helps,” he says. “With a 45- or 50-degree angle, the arrow has to travel an additional one to three yards. From 30, 40 or 50 yards out, knowing the exact trajectory with the ARC can be exceedingly helpful.”

When it comes to selecting a rifle, the first thing to look at is what you plan on hunting, Swaro says. Next, be realistic about your skill.

“The biggest thing to consider when deciding what rifle to use is how accurate and precise you can shoot,” he says. “If you have those skills, you can put down big game with a smaller caliber rifle. If you use a .243-caliber rifle and hit an elk at the right spot, it’ll go down.”

Swaro adds that the state minimum caliber when hunting big game is set at .24.

For mule deer, he says the best arrow is an expandable broadhead, which will go fast and still has some kinetic energy to penetrate the hide. Mule deer speeds require a faster arrow, Rice says.

“A deer hide isn’t as thick as an elk’s and the bones are smaller, so you don’t need as much penetration,” he says. “Deer stand about 4-feet high and elk about 6-feet, making them seem to move a lot faster, requiring a faster bow.”

With elk, Rice says hunters need an arrow that can cut through the thicker hide. If an arrow only penetrates one side, it won’t leave as big of a blood trail, making the animal harder to track, he says. “For elk I like to use a cut-on-contact broadhead,” he says. “Combined with a bow with more kinetic energy, the cut-on-contact heads make the elk easier to find after penetration.”