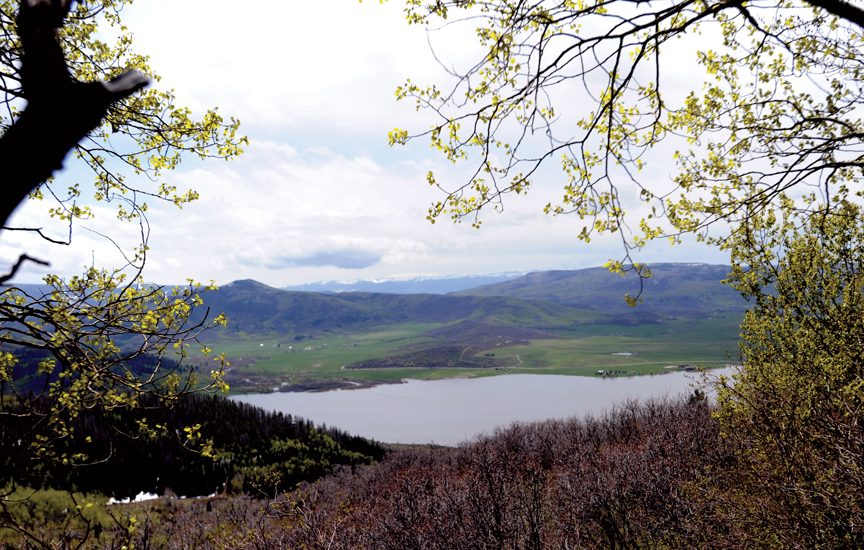 If Colorado has a hunting hotspot, it’s likely Northwest Colorado.

Open up any map and set your sights over the upper left corner. Your scope lines cross on one of the truly great regions in the country for outdoorsmen, and the ideal destination for your next hunting adventure.

Home to some of the largest elk herds in the country and extensive public lands managed by the U.S. Forest Service, Colorado Division of Parks and Wildlife, and Bureau of Land Management, Northwest Colorado provides terrain as varied as the animals that inhabit it. It’s a jumping-off point for world-class hunting, gold-medal fishing, renowned off-highway vehicle trails and plain, old Rocky Mountain adventure of every flavor.

Start in the far northwest, where the rugged canyons and ancient sandstone cliffs of Dinosaur National Monument offer a glimpse of the region’s prehistoric life. As well as harboring fossils and stories of 1800s outlaws like Butch Cassidy, it’s also where the Yampa and Green rivers come together, providing a popular destination for rafters, kayakers and anglers.

Rangely is the largest town in this far northwest corner of the state, with the town of Dinosaur also offering limited amenities. U.S. Highway 40 is the main thoroughfare, leading east through barren, hilly landscapes populated with deer, pronghorn, elk and small-game animals.

Craig, the seat of giant Moffat County, continues to be ranked as one of the top destinations in the country for outdoorsmen. It’s easy to see why. The city is surrounded by public lands and private ranches, all nestled into terrain perfect for hunting. Historic downtown offers boutique shopping and dining, but the city also has a Murdoch’s, Walmart and two large grocery stores to help equip your party for the backcountry.

Colorado Highway 13 leads north and south out of Craig. To the north is a short drive to Wyoming; to the south and west are hunter-friendly towns like Meeker. In between are game-rich hunting areas and open landscapes.

Heading east on U.S. 40 takes you to the small Routt County town and hunting hot spot of Hayden. Rich in ranching heritage, it’s also hunter-friendly and a great place to grab a bite to eat between destinations.

Another 30 minutes east is Steamboat Springs, the seat of Routt County and one of the most beautiful resort towns in the Rocky Mountains.

Known for its world-class ski area, Steamboat also is home to fifth-generation ranches and some of the best trout fishing and hunting in the state. It’s also where visitors will notice a change in the topography and ecosystems, with the sagebrush-covered hills of the region’s western reaches giving way to dramatic mountains thick with groves of aspen and pine. Like much of Moffat County, Routt County is also home to large elk and deer herds, as well as a booming moose population that has spread south from North Park.

Downtown Steamboat offers premier shopping and dining and an abundance of outdoor sporting goods stores for stocking your adventure.

South of Steamboat on Colorado Highway 131 is Oak Creek, a place to stop and eat and walk Main Street before heading off toward the Flat Tops Wilderness Area or other game-rich public lands. Beyond Oak Creek to the south are Phippsburg and Yampa, the latter of which bills itself as the “Gateway to the Flat Tops” and its prime hunting habitat.

No trip to Northwest Colorado is complete without a stop in North Park, a series of small towns as known for its moose population as its fishing. Located a one-hour drive on Colorado Highway 14 from Steamboat and Laramie, Wyo., Walden is the largest city in North Park and the best place to load up on provisions. As with the rest of Northwest Colorado, the public lands here are extensive, offering endless hunting opportunities.

Use our game management unit maps and descriptions beginning on page 42 to help you plan your hunting visit to Northwest Colorado.

Chances are your hunt here will be successful, which is the way folks in the regions like it.

Already fill your tag? There are plenty of other things to do in Northwest Colorado

If you fill your tag early, or the weather isn’t cooperating for your hunt, there’s no shortage of activities for you in Northwest Colorado. The following is a sample of how to stay busy when you’re not out in the bush.

It’s almost as if the region’s multiple hot springs were custom-made for hunters, each ready to soothe tired legs and aching backs. If you’re in Steamboat Springs, Old Town Hot Springs, near the corner of Third Street and Lincoln Avenue, provides the most convenient soaking option and a little excitement with its recently remodeled pools and pair of 230-foot slides (www.oldtownhotsprings.org).

If you have time, make the seven-mile trip to Strawberry Park Hot Springs north of town on Routt County Road 36. Strawberry Park features a series of natural stone pools tucked into the hillside along Hot Springs Creek (www.strawberryhotsprings.com). You also can take a walking tour of seven hot springs scattered throughout downtown.

There’s also the sprawling complex of 22 pools and private baths at the Hot Sulphur Springs Resort & Spa right along the Colorado River (www.hotsulphursprings.com).

Firearm connoisseurs will want to take a look at the Museum of Northwest Colorado (www.museumnwco.org). Housed in the historic former Colorado State Armory building, the museum in the heart of downtown Craig showcases the Cowboy and Gunfighter Museum as well as a new Craig centennial exhibit and a collection of nearly 1,000 working cowboy artifacts and railroad memorabilia.

Meeker visitors can revel in the past with a trip to the historic downtown Meeker Hotel, where Teddy Roosevelt once stayed, as well as a trip to the White River Museum.

“It’s free, there’s a lot of homestead goodies and artifacts, the whole story of the Meeker Massacre, and the curators are very knowledgeable and can cover a lot of genealogy,” says Suzan Pelloni, executive director of The Meeker Chamber of Commerce.

Other notable museums include downtown Steamboat’s Tread of Pioneers Museum (www.treadofpioneers.org) — complete with exhibits exploring Steamboat’s Olympic heritage, ranching roots and outlaw tales from its Wild West past — as well as the quirky and unique collections at Craig’s Wyman Museum (www.wymanmuseum.com). If you have the time, you can also drive west to Maybell and then turn east on Colorado Highway 318 for 70 miles to the John Jarvie ranch (435-781-4400) in Browns Park along the Green River, where outlaws like Butch Cassidy rode. There you’ll find a one-room stone building built by outlaw Jack Bennett; a museum with displays and video history; a two-room dugout where Jarvie and his wife, Nellie, first lived; a blacksmith shop and corral, constructed from hand-hewn railroad ties which drifted down from Green River, Wyo.; and a replica of the general store built in 1881 and furnished with many artifacts from the Jarvie period, including the original safe which was robbed by the men that murdered John Jarvie.

• MOVIES AND BOWLINGSimple entertainment is never far. Catch a flick in Steamboat at one of the six auditoriums with stadium seating at the Metropolitan Wildhorse Stadium Cinemas or on Lincoln Avenue at the Chief Plaza Theater. Craig also has a pair of screens at the recently renovated West Theater, 29 E. Victory Way.

If you want to head for the lanes, Thunder Rolls Bowling Center in Craig offers the largest facility in the region. There are another 12 lanes at Steamboat’s Snow Bowl on the west end of town and six lanes in Walden at Paradise Lanes. Beyond that, the Rifle Fireside Lanes lie just north of Rifle off Colorado Highway 13.

Endless open space means plenty of options for dirt bike and OHV users. Sand Wash Basin, about 50 miles west of Craig, offers a Bureau of Land Management area where wild horses still roam. According to the BLM’s Little Snake Field Office in Craig, 90 percent of the Sand Wash Basin’s 165,000 acres is open for off-road travel. The Craig office (970-826-5000) has visitor maps available marking some of the BLM’s inventoried routes in the basin. Jackson County also has plenty of open trails ranging from the vast timber rides in State Forest State Park, to the 60-plus miles of dirt bike-only singletrack on the Snyder and Willow Creek Trails near Rand and the state’s only OHV sand and open dune riding at the North Sand Hills Special Recreation Management Area. Other public options include the Wolford Mountain area north of Kremmling or the singletrack trails just south of Routt County, between McCoy and Burns as well as the technical trails at Bocco Mountain near Wolcott.

If you’re heading to or from the 235,406-acre Flat Tops Wilderness Area for your hunt, consider the trip on the 82-mile Flat Tops Trail Scenic Byway from Yampa to Meeker. “It’s great just to go check out Trapper’s Lake, but in the fall it’s especially worth it to see the leaves changing,” says Pelloni.

Another scenic drive is the 101-mile Cache la Poudre-North Park Scenic and Historic Byway from Walden to Fort Collins. Stop by the State Forest State Park along the way to find out why Walden has earned the title of “moose-viewing capital of Colorado.”

Closer to town, consider the short but spectacular hike to Fish Creek Falls just east of Steamboat or the three-mile loop trail up Cedar Mountain, just northwest of Craig, providing great views of the Flat Tops and Elkhead Mountains. If you’re in between the two towns, consider Carpenter Ranch, where the 1 1/2-mile interpretive trail loop in the Yampa River Preserve (free and open dawn to dusk) gives you a chance to spot some of the Nature Conservancy preserve’s 150 bird species.