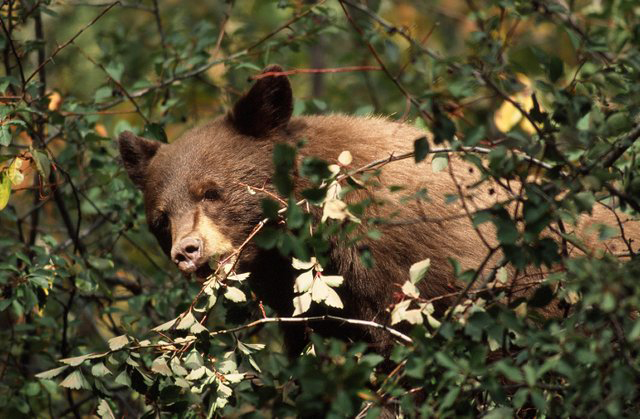 While black bears often are considered less dangerous than their larger cousin the grizzly, they’re still strong, fast and unpredictable, especially when hungry.

The No. 1 cause of human/bear conflicts is a situation where bears have obtained human food. Whether it’s tonight’s dinner, last night’s garbage or snacks in a tent, food is the primary culprit in attracting bears.

Here are a few tips from Parks and Wildlife on how to avoid encounters when hunting and camping in black bear country:

■ Stash Your Trash. Keep a clean camp by cleaning up and storing food and garbage immediately after meals. Use bear-proof containers when available. If they’re full, double bag trash and lock it in your trunk or RV. Never leave trash outside.

■ Store Attractants Safely. Never store food in your tent. Store food, beverages and toiletries in airtight containers and lock in your trunk. Many bears have discovered that coolers, bags and boxes are full of food; never leave them in your tent or anywhere a bear could see, smell or reach.

■ Keep a Clean Camp. Bears are attracted to odors of all kinds and will investigate in hopes of finding food. Don’t bury or burn excess food; bears still will be attracted to the residual smell.

■ Keep a Clean Tent. Don’t bring anything with an odor into your tent — that includes all foods, beverages, scented toiletries, gum, toothpaste, sunscreen, candles, and insect repellant. Don’t sleep in the clothes you cooked in; store them with your food.

■ Lock RVs and Vehicles. Close windows and lock your vehicle and RV when you leave camp and at night.

Big-game hunters this fall may have unexpected guests.

The continued drought-like conditions reigning over the Western Slope have caused a shortage in natural forage and the state’s black bears will be hungrier than ever heading into hibernation.

This means hunters will have to make sure their camps are extra clean and to not attract unwanted attention from ursine visitors.

“The drought means there will be less feed for all species,” said Stephanie Duckett, area terrestrial biologist in Grand Junction for the Colorado Division of Parks and Wildlife. “Depending on if, when and where the summer monsoons show up, things could be OK. But if the lack of rain continues, there will be very little forage, particularly for bears.”

Black bears consume about 20,000 calories per day when packing on the fat to keep them through hibernation, and they’re not picky when finding food sources.

That means hunters leaving coolers and food sacks outside and even hanging game around their camp may invite unwanted visitors.

Biologists say bears obtaining human food are the major cause of public safety incidents involving bears. Access to human food or garbage, whether it’s overflowing from a campground or residential dumpster or in the form of snacks in a tent, is the primary culprit in attracting bears.

When wild animals are allowed to feed on human food and garbage, they lose their natural ways — often resulting in death for the animal.

The other side of the drought is bear hunters may have more luck this year because bears will be more active in their search for food.

Last year, 4,100 hunters in Colorado killed 1,074 bears, a success rate of around 10 percent. This year, with bears expected to be more active in their search for food, that rate may increase.

“Bear hunter success will probably be quite good as bears will have to travel more,” Duckett said. “This means hunters may encounter more bears with lesser forage availability.”

Parks and Wildlife reports that all bear mortality (including hunter harvest, game damage, roadkills, etc.) has increased. There is, however, a disproportionately larger increase in non-hunting mortality sources, specifically control/damage kills.