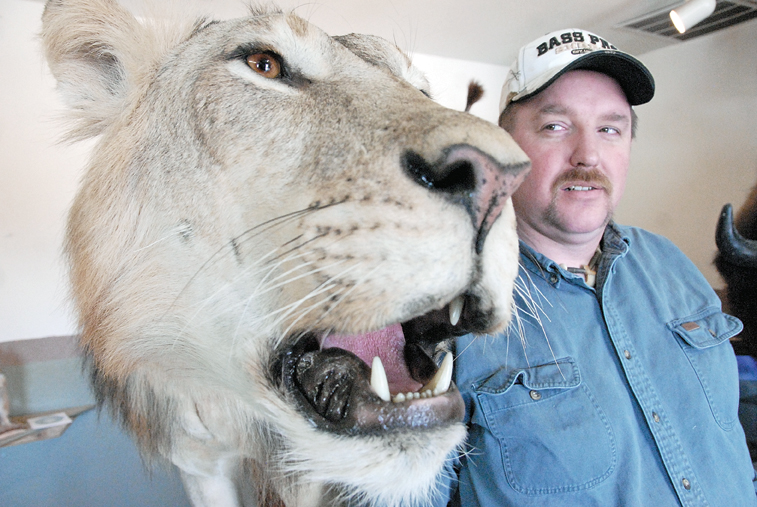 • Leland Reinier, Big Cat Taxidermy — four awards, including best of show for a stone sheep and first prize for “Can’t Kill the King.”

Taxidermy: a way of life

Taxidermy is more than just a profession for Meeker’s Bill Wille, who has owned Antler Taxidermy with his wife, Donna, for 31 years. But the beginning of his love for animals came across the country in New York and Pennsylvania.

“I couldn’t wait until I turned 12 so I could get my hunting license in Pennsylvania,” Wille says. “When I did, I shot an albino chipmunk and that was my start as a taxidermist.”

Growing up in the city, Wille worked on whatever he could find, from pigeons to road kill, and collected books and magazines on animals. And he credits his dad, who passed away when Wille was 14, for fostering his feelings toward wildlife. “I’ve always had a love for animals and he’d always take me out hunting to further that love,” he says.

Wille, now 61, says people who don’t hunt don’t understand why he became a taxidermist. “It’s a way to catch the memories of the hunt and the beauty of the animals,” he says. “I create memories every day I work on a new project.”

Wille also owns a professional hunting service in Africa. Leaving the country, he says, allows him to work with a wide variety of animals, including elephants, goats, antelopes and snow leopards.

“I’ve worked with some rare and unusual pieces,” he says, adding that his favorite piece is a leopard he bagged in Africa. “As a professional hunter, you never have time for yourself because you’re always helping others attain their game.”

In the business for almost 50 years, Wille is always looking for new and innovative techniques. But in the end, it’s all about the animals. “I have such a love and passion for it that I’ll keep doing this until I can’t breathe anymore,” he says. “Working with animals is just a way of life for me.”

You’re in good hands if you’re looking to preserve your animal in Craig. The town’s taxidermists are in a league of their own, head and shoulders above those found elsewhere in the field.

Want proof? In early June, two local taxidermists accomplished something that would have been unthinkable 20 years ago.

Scott Moore and Leland Reinier submitted a collaborative piece to a taxidermy competition and won.

Their entry — an African lion mounted on a rock cropping called “Can’t Kill the King” — won first place in the collective artist division at June’s Colorado State Taxidermy Competition in Salida. The event pitted 75 entries against one another, with taxidermists from across the West competing.

Things were different in the business a few decades ago, says Moore, 34. “When I first took over the business taxidermy secrets were secret,” he says. “The guy down the street wouldn’t tell you what he did to make it look nice. It’s changing now.”

Moore, who owns Mountain Man Taxidermy in Craig, worked with a guy down the street. Reinier owns Big Cat Taxidermy, also in Craig.

Reinier jumped at the opportunity. “A lot of people think it’s funny that we got together to work on that piece,” says Reinier, 33. “But, at the end of the day, we both became better taxidermists and now we’re good friends because of it.”

Reinier, who won four awards including best of show for a stone sheep mount, agreed collaboration was outside the norm when he was growing up.

Reinier started working as a taxidermist in 1990 in his father, Bob Reinier’s, taxidermy shop, B & L Quality Taxidermy in Steamboat Springs.

“He was the greatest,” Reinier says. “Nobody else compared.”

The elder Rainier guarded his trade knowledge, he adds. “Dad’s always been private and secretive about that stuff,” he says. “He’s hardly ever gotten along with other taxidermists, never joined an association, and never goes to the shows.”

Leland Reinier felt the same way until he started his own business in Craig seven years ago. That’s when he realized the industry could be different.

“I don’t mind working with these guys and competing right alongside them,” he says. “It’s better for you, better for them, and makes you a better taxidermist.”

Zimmerman, 43, agrees with Moore and Reinier’s assessment of the industry. “In years past, if something was working well for you, you didn’t want anybody else to know about it,” he says.

Competitions like the one in Salida, he says, have helped change perspectives. “There are a lot of seminars and nothing is really secret anymore,” he says. “Everyone’s willing to help one another, which helps our industry.”

Moore says he invested nearly $4,000 and 80 hours of work into his African lion piece.

Moore got started in the trade at 15 years old, serving as an apprentice to Bob Barton, former owner of Mountain Man. He says he was fortunate to catch that break in the old days.

“I was lucky in that he took me in and taught me how to do it,” he says. “A lot of people were turned away and had to learn on their own.”

Zimmerman says there’s a simple explanation for the number of award-winning taxidermists in Craig: Practice makes perfect. “Craig is the hub of hunting,” he says. “We have the largest migrating elk herd in the world here and there’s a lot of work for all us taxidermists.”