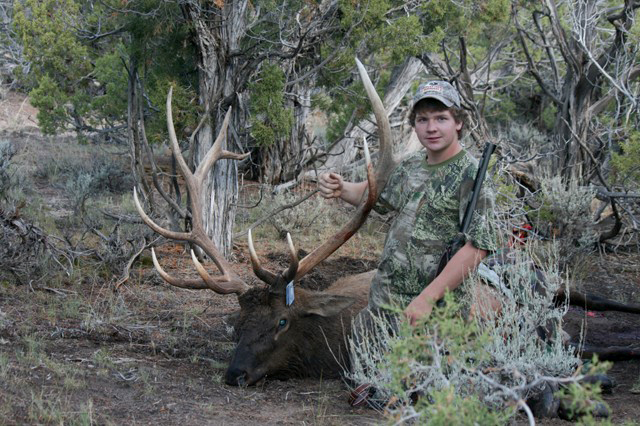 Craig — A recent Moffat County graduate made the most of his good fortune this hunting season, taking his first elk on a highly coveted tag.

The muzzleloader hybrid tag for GMU 2 typically requires hunters to put in for 15 to 20 years before they have accrued enough points to draw it. But Parrott, in his fifth year putting in for the tag and first year of being eligible for the lottery in GMU 2, got an extra-special graduation present when he found out he had drawn it in the spring.

“I found out I drew the tag on graduation day, and that was the most exciting part” of the day, he said. “I was more excited about the tag than graduation.”

Several members of Parrott’s family have been putting in for the same license for more than 10 years and couldn’t believe the youngest family member’s luck.

“I was just as excited for him to get it as I would’ve been if it had been me,” said Parrott’s father, Dave.

After drawing the tag, Parrott had about three months of preparation time, which he put to good use. He had shot a muzzleloader on only one occasion before drawing the tag, so it was important to get practice with his weapon. He also drove out to the GMU and scouted some locations during summer to develop a plan.

The shooting practice would pay off, but the location scouting became unnecessary about a week before the season began, when Parrott got permission to hunt on Larry Solace’s ranch.

“He doesn’t usually let people hunt on his property, but he said I could because I was 18, and it was my first elk,” Parrott said. “He just asked for some help in return.”

Parrott stacked firewood for Solace in exchange for hunting on some prime real estate. Once the hunt began, it was pretty basic. After seeing tons of elk during the first two days, Parrott called one in Sept. 16, the third morning of the season, and took his shot.

“He wasn’t the biggest one I saw, but he posed a shot, so I took it and hit him,” Parrott said. The elk made it about 100 yards before dropping.

The bull was not a giant like some of the trophy elk for which GMU 2 is known, but its skull and horns already are taking up half of a wall in the Parrott household.

“That was bigger than anything I’ve ever got,” Dave Parrott said. “I’m proud of him, really everything he did, he did it on his own.”

Trent Parrott said he learned a great deal about calling elk from his friend Casey Nations, who wasn’t able to stick around through the kill.

Best of all in Trent Parrott’s run of good fortune, though, was that he qualified as a youth when he drew the tag, meaning it cost just $10.

“That’s the best $10 I’ll ever spend in my life,” he said. “That was the most fun hunt of my life. It was my first elk. We saw a ton of elk, and they were really vocal the whole time.”