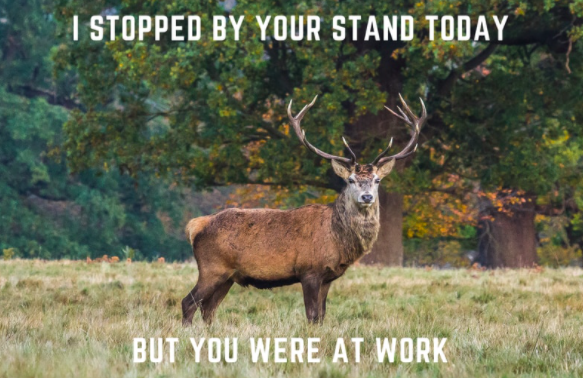 Sometimes hunts go well, and sometimes they don’t. But there’s always room for a few laughs, regardless. Here are a few jokes we’ve published or recently heard.

On the first day of the deer hunting season, a hunter fell out of a deer stand and broke both his legs.

“Why couldn’t this happen on my last day of hunting?!” the hunter cried to the doctor.

“It did,” the doctor replied.

Two skunks observed a deer hunter sneaking through the woods with a rifle.

“I hope he’s not going to shoot at us,” said one skunk.

The second skunk bowed his head and said, “Let us spray.”

LAND OF THE LOST

Two deer hunters met in the woods. The first one said to the other, “Boy, am I glad to see you, I’ve been lost for hours.”

The second deer hunter said, “that’s nothing, I’ve been lost for a week.”

A hunter took his wife and mother-in-law on a safari. One evening, while still deep in the jungle, the wife awoke to find her mother gone.

Rushing to her husband, she insisted on them both trying to find her mother. The hunter picked up his rifle, took a swig of whiskey, and started to look for her. In a clearing not far from the camp, they came upon a chilling sight: the mother-in-law was backed up against a thick, impenetrable bush, and a large male lion stood face to face with her.

The wife cried, “What are we going to do?”

“Nothing,” said the hunter husband. “The lion got himself into this mess, let him get himself out of it.”

A man and woman were on their first date. The woman was trying to make conversation and said, “So I hear you hunt deer?”

The man looked away and turned red.

“I’m not used to someone calling me dear on the first date,” the man said. \

A HUNTER AND A FISHERMAN

Do you know the difference between a hunter and a fisherman? A hunter lies in wait. A fisherman waits and lies.