The Cameo Shooting and Education Complex is a great place to get out and enjoy the outdoors, improve your shooting skills, practice appropriate social distancing, and more importantly in this stressful year, have a little fun.

The newest amenity at the 2,000-acre complex, which has been expanding and growing into its space ever since it opened in August 2018, is the sporting clays area, which opened this spring. Shooting sporting clays is kind of like playing golf with a shotgun, except that the clays aren’t sitting still, waiting for someone to shoot them. They’re flying out of a thrower, and at Cameo, those throwers are often hidden behind a rock or a shrub, so the person with the shotgun doesn’t always know from where the clays will fly across the horizon.

Cameo has two different sporting clays courses, and Neil Chadwick, who is to the world of sporting clays what Arnold Palmer is to golf, designed both of them.

“When he (Chadwick) was here, he kept asking me, ‘Have you got any idea what you’ve got here?’” said Walt Proulx, manager for the Cameo complex. “He said it was the most unique sporting clay course he’s ever designed.”

Although Proulx is a competitive shooter as well as the manager, he’s not an expert on sporting clays, so he brought in an advisory committee to work with Chadwick and Corey Howell, of Howell Shooting Supplies.

“Neil is the top course setter in the world,” said Tom Soucek, who shoots sporting clays competitively and who is also on the advisory committee. “We shoot all over the world, and this is going to be one of the top courses.”

What makes Cameo so unique is the natural terrain. At most courses, challenging and unique terrain has to be built into the course. At Cameo, the course was built around what was already there.

The north course has nine positions, with a stand at each position that the person whose turn it is to shoot takes aim and fires. The stands at Cameo were designed by the advisory committee and Cameo staff, and have a solar powered controller to activate the clays. They’re also wheelchair accessible and positioned for maximum safety.

The south course, which takes users up a natural draw, has 15 positions, some of which are easier for beginners than others.

Generally, people shoot sporting clays in teams or groups of between two and six, with only one person in the stand at a time. Only the person in the stand has a loaded shotgun, and he or she doesn’t load it until he’s in the stand, with the shotgun pointing toward the front of the stand in the direction where the clay will travel. One person in the group mans the controller, sending the clays flying when the shooter says, “pull.” Other members of the group stand outside the stand, admiring the shot or trying to figure out the best way to hit the flying clay when it’s their turn. Each stand has a rack for shotguns, so those who aren’t in the stand don’t have to hold their shotguns.

“Safety is by far the ultimate goal,” said Don Cole, another competitive shooter who is on the advisory committee. “We can’t have fun if it’s not safe.” 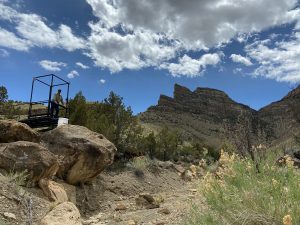 Like golf, shooting clays is somewhat addicting. Although there will be multiple clays that will fall to the ground without your shotgun ever threatening their flight across the sky, even a beginner will hit a few, especially if she has a good teacher explaining the rules and giving lessons on shooting a shotgun. It’s those few hits that give a sense of satisfaction and a desire to keep on shooting, just like those hits on the golf course when someone can feel the club smack the ball, hear the thwack and watch it fly.

At most gun ranges, the sporting clays course is the biggest draw, and Proulx expects it to be the same at Cameo. Participants only need a shotgun and a willingness to try. The sporting clays area will have the same hours as the rest of the range at Cameo, and participants can rent a side-by-side to drive up to either course and to drive from stand to stand (like a golf cart), or they can drive to the course in their vehicle and then walk the course from stand to stand. The cost for the clays will be 40 cents per clay, and the amount of clays will be loaded onto a card, which can then be used at every controller.

In addition to the two courses, Cameo will also have a five-stand area for competitive shooting. The courses were designed in such a way that the stands and the throwers will be moved around within the course to keep it interesting for those who visit often, and more like shooting in a natural environment, where pheasants or rabbits don’t always come from exactly the same place and move in exactly the same way.