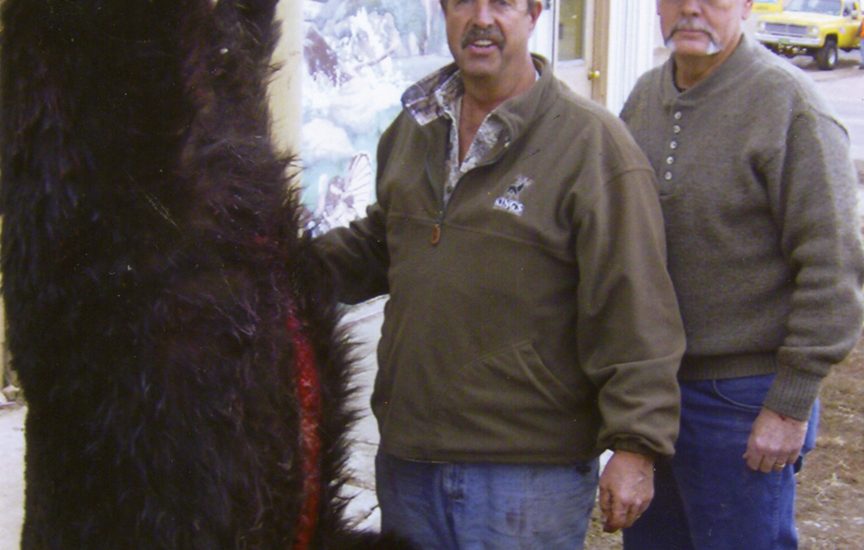 The story that started it all: On Dec. 4, 2010, the Saturday Morning Press published the story of Richard Kendall, who tracked a bear into a cave and killed it. Reaction to the story spread throughout the country, with some condemning Kendall’s actions. Kendall insists he did nothing wrong.

It was a shot that reverberated around the state and beyond.

In November 2010, Craig resident Richard Kendall crawled to the mouth of a dark cave with a .45-70 caliber lever-action rifle.

Adrenaline pumping, Kendall glimpsed into the cave with a flashlight and briefly made eye contact with the animal. The bear growled. Then, Kendall fired two shots.

The short-term ramification was that Kendall had bagged the fourth-biggest recorded black bear in the world.

The long-term result, however, hasn’t been as glorious for the lifelong hunter.

The story of Kendall’s hunt appeared on the front page of the Dec. 4, 2010 Saturday Morning Press. Within days, Kendall’s name appeared on websites for ABC, CBS, The Denver Post, Field & Stream, The Huffington Post, Los Angeles Times, Seattle Times and other media outlets.

Comments about his hunt include those raising ethical concerns about fair chase to those in support of the hunter. Within six months of Kendall’s hunt, the Colorado Wildlife Commission revised rules to prevent similar hunts from ever happening again.

Randy Hampton, spokesman for the Colorado Division of Parks and Wildlife, says Kendall’s actions were legal at the time.

“It’s important to note, Mr. Kendall did not commit a violation in what he did,” Hampton says. “There was an issue regarding the use of a flashlight, for which he was cited, and (Kendall) paid the fine.”

Rather, the question at the crux of the Kendall controversy is whether it was ethical. “It comes down to the element of fair chase,” Hampton says.

Kendall’s hunt began a week before he fired his shots. He and a friend from Arizona were scouting for mountain lion tracks in the Wilson Creek area of Moffat County. Instead, they found tracks that belonged to a big bear. A very big bear. Kendall described each track as being the size of a ball hat.

For several days, Kendall and his friend returned to the area to continue tracking the bear. Eventually, they tracked the bear to a cave.

That afternoon, they drove to Meeker, purchased a bear tag and hoped the bear still would be in its cave the next morning.

But the question today is as relevant as it was then: was it OK to pull the trigger?

Reactions were mixed, based on comments posted on the Craig Daily Press website.

“What would possess a person to hunt down an animal, minding its own business in its cave, and shoot it, then talk about how fabulous he is?” an anonymous commenter wrote.

Another commenter said the hunt was fair.

“He had a tag, which means the DOW had determined that the bear population in that area needed to be controlled through hunting,” the commenter wrote. “He didn’t use bait or shoot the bear from his truck. He followed the bear’s tracks…and somehow came to within six feet of the bear, who was apparently awake. … So he did what he was authorized to do by law and shot the bear.”

The Wildlife Commission, on the other hand, was not pleased. Although the hunt was legal, the commission sought to change the rules.

In early 2011, the agency directed the Colorado Division of Parks and Wildlife to review Kendall’s hunt and draft a new regulation.

In a January 2011 news release, Commission Chairman Tim Glenn said the commission was compelled to act. “This is a perfect example of the kind of issue that the Wildlife Commission needs to look at,” Glenn said.

“We talked about the importance of fair chase for maintaining public trust in what we do. That is absolutely critical.”

A few months later, the commission approved the Division of Parks and Wildlife regulation and banned hunting, killing or harassment of bears in dens. The regulation went into effect July 1, 2011, and a violation carries a $68 fine.

For several months after the initial media coverage, Kendall remained silent. In early August, he agreed to discuss the hunt and the impact the media coverage has had on his life.

Kendall says the fervor has diminished somewhat, but it continues to make noise.

“It’s calmed down, but I still get telephone calls from magazines all over the country,” he says. “And I still get calls from people who tell me what a no-good (expletive) I was for killing a bear in a den. They’ve ridiculed and knocked me down for it, and there was nothing illegal with the whole situation.”

Part of the humiliation came at the hands of the Division of Parks and Wildlife, Kendall adds. Shortly after the story broke, officials contacted Kendall and an investigation ensued. Kendall contends the agency misrepresented the facts of the investigation in the media.

“Randy Hampton, on TV says, ‘Well, this bear was sleeping and hibernating,’” Kendall recalls. “How does he know? He’s never even talked to me. It wasn’t sleeping. It wasn’t hibernating. It had been out the whole week before, every single day. I had seen its tracks every day. A hibernating bear doesn’t come out of the den.”

“They’re saying this is unethical, but what’s ethical about treeing a lion or bear and shooting it? I did everything right, by their laws, and yet I get in trouble for it.”

Kendall contends the Division of Parks and Wildlife regulation was a result of state agencies caving to pressure from urban constituents.

“The game wardens are the ones that made me into a bad person,” he says. “They were getting pressure from higher above, trying to make me look bad to please the public.

“All the power is on the Eastern Slope, not over here. Everybody on this side of the mountains hunts and understands what kind of people we are. Those people on the other side are different. They’ve never hunted. They don’t have an understanding.”

Hampton says he doesn’t recall the details from television news appearances, and acknowledges that he never spoke to Kendall.

“I’ve never met or talked to Richard Kendall,” Hampton says. “I have no ill will toward him. He was just a guy who got caught up in a very unfortunate situation.”

Hampton adds that the Division of Parks and Wildlife never sought to defame Kendall. “The concern was not Richard Kendall,” Hampton says. “I think he’s tried to apply all of the discussion about the regulation to his situation, but that’s not the case.

“What we did talk about was the fact that the Wildlife Commission, in passing the regulation, expressed the concern that people would enter a den and take a sleeping or hibernating bear because they would hear about this case, this incident, and think Colorado condoned that.”

As to whether Kendall’s bear was sleeping or hibernating, Hampton says there’s no sure way to know. The only established fact from the case is that the bear “was in a den,” he says. “Once again, he did not violate the law,” Hampton adds.

Hampton says that the issue of regulation arose partly from constituents’ demand, but that’s not the whole story. “The Division of Wildlife is quite familiar with outrage,” Hampton says.

“We do have an obligation to listen to our constituents. In this case, we heard from many sportsmen who were concerned about the harvest of bears in a den. However, the decision was not made in response to outrage. The decision was made to prevent further take in that manner.”

Kendall, who has been hunting since he was 8, will continue hunting as long as he can. “But I’ll never kill another bear,” he says, “because I’ll never find another one as big as this one.”

In the meantime, Kendall says his record-setting bear doesn’t hold the same magic it once did.

He adds that he’s still upset by the ordeal.

“It hurts me, it hurts my family,” he says. “I can’t even tell you how bad this whole thing has hurt.”

And he admits that if he could go back in time, he’d keep things quieter. “If I did it again knowing the same things I do now, no one in the whole country would know that I killed that bear except when I checked it in,” he says. “After that, nobody would ever see it again.