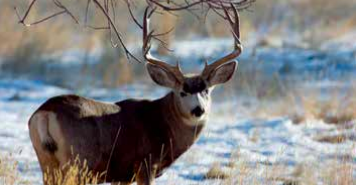 As a youth growing up in Steamboat Springs in the early ‘70s, hunting season often included a visit to the Piceance Basin spanning Rio Blanco and Moffat counties, where the “largest deer herd in North America” was rumored to live.

With our Marlin .30-.30s, my brother and I would camp with dad and hike the cedar-covered hills of the basin.

“In the 1950s and ‘60s, Piceance Creek had a boisterous deer herd,” said Mike Swaro, assistant wildlife manager for Colorado Parks and Wildlife. “It’s not like that now.”

Even into the 1980s, the White River herd in western Colorado’s Piceance Basin ranked among the country’s largest, estimated at more than 100,000 deer, unofficially qualifying it as the largest and most productive migratory mule deer herd on the continent. And while the mule deer numbers statewide have dipped dramatically since that heyday, the news isn’t all bad for the region once known as Colorado’s “mule deer factory.”

Colorado still has one of the largest mule deer populations in the nation, attracting hunters from across the country. But for several years, the impacts of human development, habitat fragmentation, severe winters, droughts and disease took a significant toll on the animals, diminishing herds to a fraction of the numbers considered “healthy” by Colorado Parks and Wildlife. Through years of effort, the herd numbers in the Piceance Basin eventually leveled off and are once again slowly climbing upward.

The mule deer herd residing on the large, mostly BLM-managed public lands west of Colorado Highway 13 between Meeker and Rifle has survived better than muleys in most GMUs, in large part due to their ability to survive Chronic Wasting Disease (CWD).

“We have seen lower numbers of Chronic Wasting Disease in that area,” Swaro said. “It’s maybe showing up in 2 or 3 percent of the bucks tested.”

That compares to numbers in the mid-20th percentile for areas north and south of Craig.

CWD is found twice as often in bucks as it is in does, and harvesting more bucks will help lower CWD numbers, Swaro said. Colorado has already seen improvement in the percentage of deer testing positive in recent years, and hunters are encouraged to have their deer heads tested at the CPW facility north of Craig for a $25 fee. Hunters heading off to trophy areas in Northwest Colorado will receive notices of mandatory (free) testing for deer taken in units 1, 2, 201 and 10.

Hunters still have an excellent chance of filling their mule deer tags in units north and south of Craig, Swaro says, especially if they list bucks in the second or third seasons as their first choice in the annual draw. It’s always harder to draw a license in the early and late seasons, and in the trophy areas.

The biggest factor in determining deer herd sizes is still Mother Nature, according to Swaro. And the mild winter of 2019-20 should further increase hunters’ odds of success.

“Winter mortality is always a big factor,” he said. “This winter was a good winter, an easy winter. We held strong on the numbers.”

Hunters should also be the beneficiaries of some significant structural changes to the seasons in 2020.

“There will be bigger breaks between the seasons. Some went from two (days) to nine days,” Swaro said. “That means less pressure on the animals, maybe giving wildlife a chance to return to public land.”

With all the season dates pushed back a few days, there will be more deer rutting in the third season, and deer and elk that stay hunkered down until the snow moves them will be more accessible to late season hunters, Swaro says.

While the Piceance Basin may not currently be the “deer factory” it once was, the herd has survived decades of habitat loss, oil and gas development, weather impacts and increased vehicle traffic through the area, and still boasts numbers that the rest of Colorado can envy.