Ask any elk hunter worth his weight in lead what the top hunting units are in Colorado, and GMUs 1, 2, 10 and 201 in the far northwest corner of the state rise to the top of the list like smoke from a muzzleloader. Bulls in the 300-plus size are common, and elk tend to stay put over the seasons. It also offers a variety of different age-class bulls.

“These northwest units are all great and offer some of the best elk opportunities in Colorado,” says Chris Jurney of Chris Jurney Outfitters, who has been hunting the units for more than 30 years. “They offer everything that an elk hunter wants — big bulls, low hunter numbers, low pressure and lots of public land. They each have their own different qualities, but the limited opportunities and quality of animals is why they are the most sought after hunting units in the nation.”

Colorado Parks and Wildlife has strict requirements for hunting them, designed to lessen pressure and allow for quality hunts. Most hunters put in decades of applications and acquiringpoints to better their lottery chances of getting a coveted tag to hunt them. On average, the units take 20-plus points. 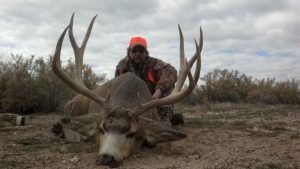 “The kicker is that it takes a lifetime to draw a tag,” says Jurney. “It’s a true once-in-a-lifetime opportunity.”

Topographically, at 9,700 feet Diamond Mountain represents the region’s highest point, with the elevation dropping to 5,100 feet at the White River. Ground cover is typically sage and sage-grassland, as well as piñon and juniper.

“They’re all characterized as high desert country,” says Jeff Goncalves, CPW’s wildlife manager for the nearby Maybell district. “And they’re known for their massive bulls.” He adds that despite the herd being smaller than the Bears Ears herd to the east, most of its bulls are able to reach maturity.

Still, he cautions calling them “trophy” units. “A lot of people call them that, but we label them ‘quality’ units,” he says. “They offer quality animals and a quality experience, without a lot of pressure.”

The reason for the quality is limited license availability. In marquee units like GMU 201, he says, residents will use up to 25 or more preference points to get a tag, with non-residents burning through as manyas 30. “There are people who have been putting in for tags there for over a quarter century,” he says. 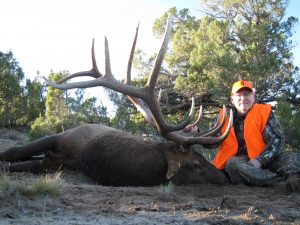 While he doesn’t know the exact numbers, the majority of hunters lucky enough to draw tags, he says, go solo rather than with an outfitter. “People put in for them for a long time, and scout the area for upwards of 25 years,” he says. “So they know the region pretty well and have a pretty vested interest in their hunt.”

It’s these people, he adds, who are the most successful. “Hunters who do their homework are the one who do well there,” he says. “A lot of people think these areas have herds running rampant, but that’s not the case. They’re still elk; you still have to put in the time and effort to find them.”

Goncalves adds that the units also harbor good cow hunting. “People don’t necessarilywant to use up their preference points on cows there,” he says. “So it also offers really good cow hunting. They don’t get a lot of pressure.” 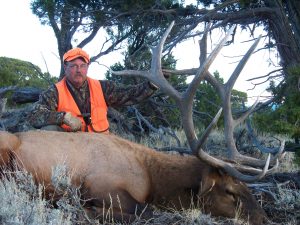 Still, it’s the bulls that make it so special. “These units represent what wildlife management can and could be for other areas across the country,” says Jurney. “For anyone who’s ever drawn a license, it’s been has an incredible opportunity; we’ve all been truly blessed.”

A final piece of advice from those in the know: Don’t take the first bull you see. Hold out for a good one, as the average size is around 305.

Following is a breakdown of these highly heralded units.

Located on the far western side of Colorado, GMU 1 is the smallest of the “trophy” units in Northwest Colorado, as well as the roughest. “It’s the most rugged and remote of the four,” says Goncalves. “It’s really, really rocky.”

Bordering Utah on the west and flanked by the Green River, the oval-shaped unit is largely defined by where the Green River enters Colorado from Wyoming and exits to Utah. “It’s pretty much everything on the west side of the river,” says Goncalves.It’s also intermixed with private land, as well as some access issues, so hunters need to do their research beforehand.

The unit’s biggest feature is Diamond Mountain at 9,700 feet, which can spell snow in the later seasons.Most people hunt the unit, he adds, by driving in from Utah on top of the mesa, or accessing it from Brown’s Park. While it takes the least amount of points to draw, it still requires up to 19 for residents. Bonus: Unaware of boundaries, elk often enter the unit from Dinosaur National Monument, where hunting is prohibited, especially on dry years looking for grazing.Hint: try Hoy Draw and Chokecherry Draw.

Located on the north side of Dinosaur National Monument, GMU 2 is a checkerboard of public and private land and the biggest unit of the four. Encompassing a large expanse of BLM land as well as Douglas Mountain and Sand Wash Basin, its southern border is marked by the Yampa River, and its eastern boundary by the Little Snake River. Just beware its rough terrain. “It has some pretty rugged country down by the border of the monument and up on Lookout Mountain and Dry Creek Basin,” says Goncalves. “It’s pretty desolate, badlands country.”

As well as offering great bulls, another attribute of the unit, Goncalves adds, is its year-round elk herd. “It has small pockets of desert elk which stay there year-round, which makes it pretty unique,” he adds.

This is the second biggest of the four quality units, bordered by US Highway 64 on the south, Utah on the west and the Yampa River to the north. It comprises mostly BLM land, interspersed with scattered private pockets. It’s this land ownership that makes GMU 10 a bit different from units 1, 2 and 201, says Bill de Vergie, CPW’s area wildlife manager for Rio Blanco and Moffat County. “It has more private land than the others, so public access for hunting is a bit more difficult,” he says. “It’s still a great experience with lots of bulls, but hunters need to pay attention to land status a little closer.” Hint: Try Blue and Moosehead mountains, which are popular areas known for harboring big bulls.

With 85 percent of its land public, GMU 201 represents the second smallest of the big four quality units. It’s also the hardest one to draw a tag. Squeezed into in the state’s far northwest corner, it’s bordered by Wyoming to the north, Utah to the west, and Browns Park and the Green River to the south. While it has large areas of piñon/juniper and even lodge pole forest, its upper reaches, especially on the south-facing sides of Diamond Peak and Middle Mountain, “can be rough, rocky and rugged and overall pretty nasty,” Goncalves says. Most hunters access the unit above Browns Park off of Cold Springs Mountain.Bonus: An agreement with a private landowner and the State Land Board has opened several thousand acres in the unit for hunting.

Last year, one hunter lucky enough to get a tag for GMU 201 was 20-year-old Erin Fagan of Craig, who got her opportunity through the lottery draw with only seven points. “My dad was so mad,” she says about his long wait to hunt the area.

Putting jealousy aside, her father helped her scout the unit every morning before the season started. And they liked what they saw. “There were big-score bulls everywhere,” Erin says. “We saw them crossing the river and just driving down the road.”

Hunting since age 12, Erin had harvested cow elk before, but never a bull. The hardest part, she says, was not pulling the trigger on a six-point the first day.

Finally, on the third day after spending hours chasing a monster seven-by-seven that disappeared with his herd, Erin settled on a big six-point she was led to by yet a third bull. And then she waited, settled down, took a breath and pulled the trigger. Welcome to hunting GMU 201. “I`ve never experienced anything like that,” she says. “And that was the first time I’ve ever gotten a bull.”

Residents drew out at 16 preference points

Nonresidents drew out at 24 preference points

Residents drew out at 23 preference points

Nonresidents drew out at 27 preference points

Residents drew out at 22 preference points

Nonresidents drew out at 27 preference points

Residents drew out at 24 preference points

Nonresidents drew out at 28 preference points