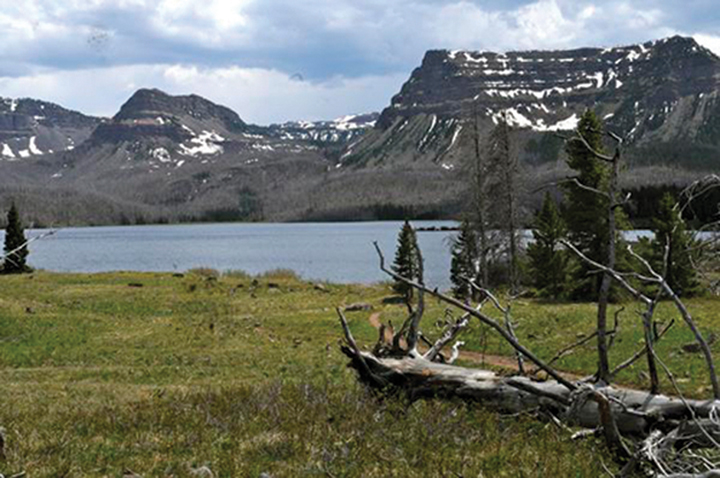 It must have been a sight to behold.

Colorado undoubtedly had seen bigger wildfires, even bigger blazes during that very summer of 2002 alone. But the imposing Big Fish fire was all the more extraordinary, set against the dramatic backdrop of Trappers Lake and the striking Flat Tops Wilderness surrounding it.

All told, 17,000 acres in the so-called “Cradle of Wilderness” were scorched by a lightning strike while firefighting crews watched the pristine valley go up in flames.

Such is the heart-tugging dilemma of Wilderness with a capital “W” — essentially a government mandate commanding nature to run its course even when it mars our perception of natural beauty.

But given its eminent role in the genesis of the Wilderness Act of 1964, Trappers Lake demanded nothing less.

“We consider the fire a blessing,” said Holly King, owner of nearby Trappers Lake Lodge since 2005. “It put us 10 years ahead of the beetle kill and the big fires of 2012. It’s just something different to look at.”

Since it was first surveyed by Arthur Carhart for the fledgling U.S. Forest Service in 1919, Trappers Lake has always been regarded as something “different,” or more accurately, “unique” to look at.

These days, the 300-acre lake sitting at 9,600 feet remains renowned as the state’s top breeding ground for native Colorado River cutthroat trout. But, abundance of feisty fish aside, it was the postcard-perfect setting of the natural lake, surrounded by soaring volcanic cliffs, that originally captured Carhart’s attention.

After viewing the spectacular scene, Carhart completed the survey for a proposed private lakeside community, then convinced his superiors in Denver that Trappers Lake was an irreplaceable resource that should be preserved in its natural state for all the public to appreciate.

The unprecedented notion led to establishment of the Flat Tops Primitive Area in 1932, while Carhart went on to work with conservationist Aldo Leopold and lay the foundation of the modern Wilderness concept eventually adopted by Congress.

The 235,000-acre Flat Tops Wilderness Area was formally recognized in 1975 and is now the third-largest in Colorado.

Yet, for many Coloradans, it remains relatively unknown.

“It’s a little bit of a drive, but that’s a good thing. It keeps the crowds away,” said Don Reeves of Boulder, after he and paddling partner Mary Hall finished portaging his handmade kayaks.

“We spent the weekend up at Steamboat Lake, but that’s not what I was looking for,” he added. “I wanted more of a wilderness lake, not a bunch of campers. After hearing about Trappers, we looked at a map and said, ‘I think we can make it happen.’ “

Because the Trappers Lake shoreline falls just within Wilderness Area boundaries, launching any boat (other than those rented from the lodge) is done by hand after carrying it a short distance from the trailhead. Like all Wilderness, motorized use is forbidden.

As a result, there is typically plenty of elbow room for fishermen either wading from shore or paddling watercraft small enough to shoulder on the well-worn trail over open terrain.

The lake’s abundant insect life grows some bragging-size fish, although the average cutthroats fall into the 11- to 15-inch range. Special regulations mandating artificial flies and lures only, as well as the immediate return of all natives over 11 inches, help maintain the largest population of Colorado River cutthroats anywhere, serving as an important spawn-taking site for wildlife managers.

Good fishing can be found in shallow areas almost anywhere around the 180-foot-deep lake. Midges are the primary food source, but cutts are often willing to take classic flies such as an elk-hair caddis, gold-ribbed hare’s ear or woolly bugger.

At peak summer, keep an eye out for the callibaetis mayfly hatch.

“The guys with fly rods were crushing it out there,” Reeves said after losing his spinning tackle to a snag. “They were catching one after the other.”

The acclaimed fishery that drains into the North Fork of the White River is surrounded by dozens of equally worthwhile destinations and a vast trail network accessing them.

Hikes and horseback trips are a large part of Trappers’ allure, ranging from hours to days across the Flat Tops to spots such as Little Trappers Lake, Upper Island Lake, Wall Lake or up the spectacular Chinese Wall for an adrenaline-fueled trek over the Devil’s Causeway to Stillwater Reservoir near Yampa.

“We’ve got hikes galore,” King said. “And really great fishing in both the rivers and the lakes.”

While a gray ghost forest still surrounds much of the lake and lodge, regeneration is equally evident 10 years after the Big Fish blaze. And the burn area is relatively easy to hike above as pristine wilderness characteristics quickly reveal themselves.

The native elk herd is considered the largest in North America, sharing the expanse with deer, moose, bears, cougars and local claims to a pack of wolves.

The lodge maintains six wilderness camps for rent through hunting season, either with or without guides.

Several nearby Forest Service campgrounds offer easier lake access, while 15 rustic cabins and a restaurant serve as the social and sunset-scoping hub at Trappers Lake Lodge.

“I just love the Flat Tops,” Reeves said after satisfying his nature itch. “I love the views.”

Something to behold indeed.