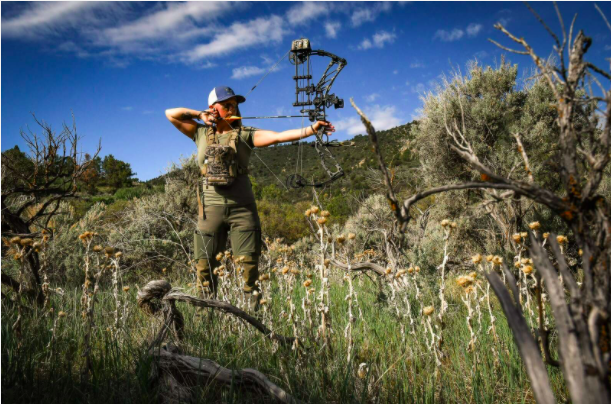 With her bow resting evenly across her shoulders, Andraya Grangroth swiftly paced up a steep, sandy incline toward the top of a hill outside of New Castle.

“Don’t tell anyone about this spot,” Grangroth said, seemingly unaffected by strenuous cardio demanded by the hike. “I like to challenge myself physically during a hunt. It’s one of my favorite parts.”

Grangroth’s destination is her spot to hunt turkeys, about a mile away off the road where she parked her Toyota Tacoma.

Outfitted in hunting apparel she designed herself, the 30-year-old Washington State native is making a name for herself in the outdoors industry within northwestern Colorado as a hunting guide and entrepreneur.

But getting into an industry mostly dominated by men wasn’t easy. Luckily, Grangroth’s upbringing played a role in landing her first hunting guide job.

Growing up on a 10-acre property, hunting and fishing was a lifestyle more than a hobby for Grangroth’s family.

“We grew every fruit and vegetable possible in the state of Washington. Our garden was essentially the size of a football field. Then we would fish in the summer for salmon and steelhead,” Grangroth fondly recalled.

As soon as Grangroth turned 12, she took a hunter’s safety course.

“I don’t think I shot my first deer until I was about 14,” Grangroth said.

About a decade later in November of 2016, Grangroth’s first hunt was to fill a mule deer tag.

“I remember standing over it and being like ‘oh, dad’s not here to help me I’ve got to do this.’ And it was a huge awakening for me as I was packing out that buck,” Grangroth said, adding that she carried 120 pounds of deboned meat back to her vehicle in one trip.

“It was one of the hardest things I’ve ever done, and I had a lot of conversations in my mind.”

One of those conversations was about how she could make a living from hunting.

Visit postindependent.com to read the rest of this article.