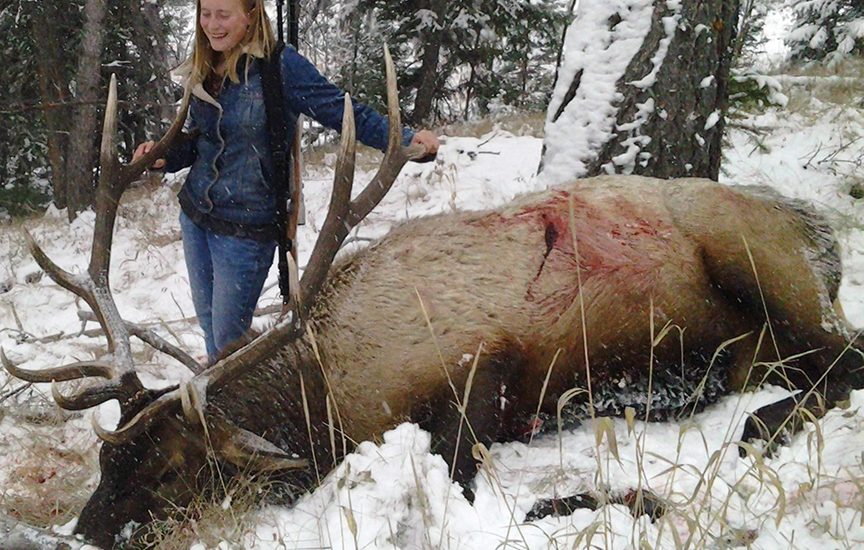 Parents hope to see their children succeed, but Kendra Halder’s level of success this hunting season exceeded even her mother’s hopes.

Kendra, a native of Yampa, bagged a monster bull elk — the first bull she has ever harvested — during second elk season earlier this fall.

It was not her first hunt, as the 13-year-old has taken down cows in the past while hunting with her father, John. But this hunt was special, mother Amanda said.

“I hadn’t gone hunting with her yet, her dad had done that,” Amanda said. “I had usually been working. It was fun to go on a hunt with her.”

Kendra’s trophy bull didn’t look like anything worth writing home about from afar, Amanda said. She first saw it on the first Sunday of the season and told Kendra and grandpa Mike Halder about the bull.

Amanda said the bull didn’t look especially big, but Kendra was not looking to be picky in getting her first one. However, darkness fell before any shots could be taken that day.

The plan was to wait for another opportunity to take that bull, but two days passed with no sighting. That had Kendra feeling nervous.

“I didn’t think we were ever going to see him again,” she said of the waiting period.

But the bull would rear his head again and the Halders would be there to take advantage.

“Wednesday morning my grandpa saw him and then Thursday afternoon he saw him again, so he called us,” Kendra said. “My mom came and got us and we went out there.”

Kendra went with her mother, grandfather and sister to a ridge about 400 yards away from the bull, she said. The rest was simple for Kendra.

“I sat down, got out my dad’s 300 and shot him,” she said. “It was so far away I aimed at the backbone and hit him right in the center. He dropped right away.”

When the Halders walked up to the site of the kill, they were in for a surprise. As a result of the distance, no one was ready for the size of the bull Kendra had taken down, but lying on the ground was a 6×6 class 300 bull with a spread around 28 inches, according to Amanda.

“It was much bigger than anything I’ve ever gotten, or her dad,” Amanda said. “Her grandpa’s gotten big elk down in New Mexico, but that’s New Mexico. There’s a lot of family friends that have said they’ve never shot anything that big.

“I think we were all floating (when we saw it).”

None were more excited than Kendra, who immediately knew she would like to get her kill mounted and still beams when telling the story.

Kendra plans on continuing to hunt this fall, now getting more experience hunting for mountain lions, which she has done once with her father. It’s unlikely any result will top her hunt in GMU 15 in late October, though.

“It’s definitely the most memorable hunt I’ve ever been on,” she said. “It’s going to be a tough one to top.”