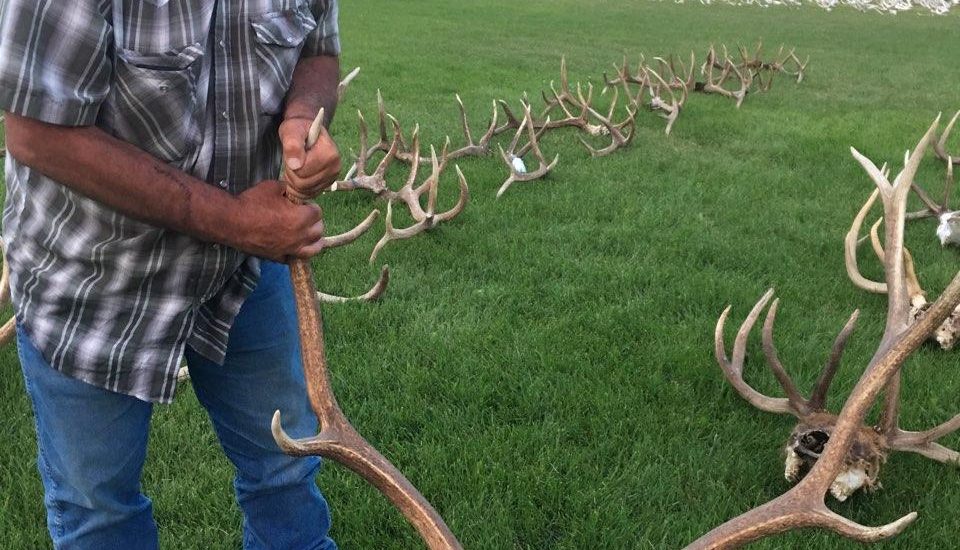 Happy with the rack from your recent trophy? That’s nothing compared to the collection amassed by Ron Crawford of Oak Creek.

Nicknamed “Antler Man,” Crawford, 66, has amassed a collection of more than 1,200 found and purchased elk antlers at his home, which more than 300 onlookers witnessed when he put them on rare display last year on the Soroco High School football field.

Crawford said he’s been collecting shed antlers for about 40 years and has them from elk, moose, deer and caribou. “It’s something pretty strange to do, but I like it,” he says. “I’ve seen bigger piles of them, but they’re all from horn buyers. As far as private collections, this is as big of one as I’ve ever seen.

“It was really interesting to do,” he adds. “I didn’t realize all the interest it would bring.” 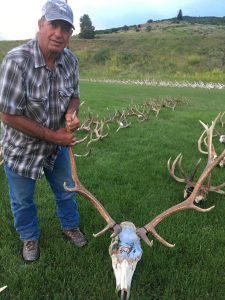 Crawford has been collecting antlers since his 20s, every from Alaska to New Mexico, and has several prizes in his collection — including a huge set of elk antlers that from Idaho that scored 415. When not on display (which they rarely are), he keeps them in a couple warehouses near his home in Oak Creek.

“It’s been my passion for years,” he says. “When I first started collecting them, everyone thought I was crazy. No one was doing it back then.”

He adds that the game has changed quite a bit from his early collecting years. “There used to not be any regulations for collecting them,” he says. “Now they have seasons for collecting, which I don’t really understand. I know it’s to protect the animals, but I’m not sure creating collecting seasons is the right answer.”

He’s sold some of them, he says, and has made a few chandeliers and other things out of others, but for the most part he just keeps them.

Crawford, who admits he’s strictly a “meat hunter,” says it might be a while until he puts them on display again. “As hard as it was, it might be a once-in-a-lifetime event,” he says. “But I saw the interest it created, and how many people enjoyed it, so I should probably do it again sometime. Maybe I can charge a fee and give donations to the school’s athletic club.”